Traffic delays in west Menlo & Atherton on Thursday, April 4 due to Obama visit 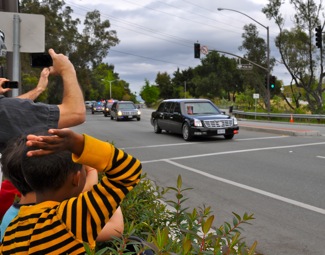 On Thursday, April 4th from 8:00 am to 1:00 pm there will be major traffic delays in the area of Alameda de las Pulgas, Sharon Park, and Valparaiso Avenue in Menlo Park due to President Obama’s visit, according to the Menlo Park  Police Department. Affected Atherton streets, in addition to the Alameda, may include Walsh Rd., Stockbridge Ave. and Selby Lane.

Photo from April 2011 when the President’s motorcade proceded west on Sand Hill Road.