“Last Friday, four students ‘won’ the honor of shaving principal Eric Burmeister‘s head — their reward for improving the most in math and reading in a pilot program that seeks to personalize education to the individual needs of the student. 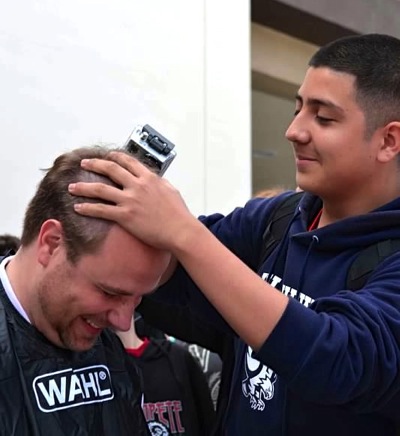 ‘”We implemented the program in January,” explained the principal. “At that time I told the 50 kids who were in the program that whoever grew the most in reading and math in 10 weeks would get to have my head in front of the whole school.’

“Three 8th graders and one 7th grader were given the opportunity, and our principal was a real trooper. The kids went crazy over the entire production. During the shaving, Erik mentioned that he was going to be in a wedding the next day!

“On Saturday, parents and students from Hillview took personalized cards and flowers, which they assembled themselves, to over 80 neighbors who were impacted during the two years of Hillview’s construction. The neighbors very much appreciated the fact that the students themselves hand delivered the flowers and the notes.”