The class is called Implementation. It’s the capstone of pursuing a degree in Product Design at Stanford, an interdisciplinary program that includes mechanical engineering and psychology as well as design.

Jack Brody, who grew up in Atherton and graduated from Menlo-Atherton High School, teamed up with classmates Alex Walker and Maddie Thompson to create the first portable Bluetooth speaker that they’ve named Tip Top. At the end of April, they launched a campaign on Kickstarter with the goal of raising $215,000.

As of May 9th, they’d raised over $60,000, and, just as importantly to them, over 300 supporters. This funding cycle ends June 1, just a couple of weeks before they graduate. They’re hoping to spend the summer bringing their Tip Top speaker to market.

“The Implementation class brought a lot of things together that we’d learned over the years,” said Alex (pictured right), during our visit at Jack’s family’s Atherton home. “Product design is tricky because you learn various skills at different times.”

Added Jack: “We got to know each other through our major, which only has about 50 students. I think the three of us balance each other very well.” 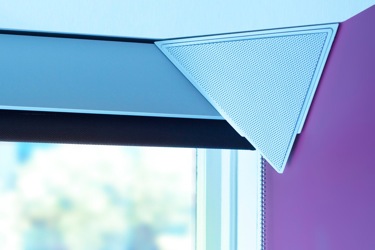 What differentiates the Tip Top speaker, in addition to its shape — which fits snugly in a ceiling corner space — is the how the sound is amplified.

“The amplification of the sound was not something we were initially aware of,” said Jack. Added Alex: “We were designing for young urban professionals who live in tight spaces. The idea was to get the speaker up and out of the way. The science of sound didn’t come until later.”

The discovery, which has since been validated, happened in Jack’s dorm room. They’d invited a bunch of friends over and asked them to close their eyes and figure out where the sound was coming from.

“Whether the speaker was in the middle of the room or up high was so different — with higher being better — that the people thought they were listening to two different speakers, not the same speaker in two different places.”

The Tip Top speaker is what the young entrepreneurs hope is just the first of many products. They’ve named their company Nine Six Five. Why? Explained Alex, who’s known as Walker, “WMJ [Walker/Maddie/Jack] on a phone is 965.”

More information about the Tip Top, including pre-ordering through a financial investment, is available on the Kickstarter page.

Photo of Jack and Alex by Irene Searles