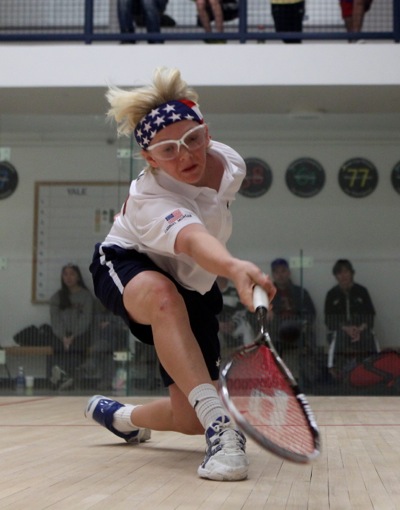 The final qualifying spot for the $70,000 Netsuite Open Squash Championships will be contested Thursday between local squash player, Gabriel Morgan, 15, and Gareth Webber, Director of Squash at the Los Gatos Squash Club. The two Bay Area stars will play on September 12 at 6:00 pm at the Pacific Sports Resort in Redwood Shores. Admission is free.

The NetsuiteOpen, featuring most of the world’s top professional squash players, including current World Champion, Ramy Ashou of Egypt, will be held Sept. 25 through October 1. Qualifying and early round matches will be held at Stanford University, The Olympic Club, Bay Club San Francisco and the University Club. Quarter, Semifinals and the Finals matches will be played on a spectacular “glass cube” show court  on the south lawn of Justin Herman Plaza in San Francisco.

“Squash in the Bay Area is on fire,” said John Nimick, Event Chairman and U.S. Squash Hall of Fame member.  “Nothing signifies squash better than the battle of these two elite players for the last spot in the tournament.

“Gabriel Morgan is a top-ranked U.S. junior player and a National Champion — the very first from California — while Gareth Webber, a former head coach at Yale,  is a veteran international player dedicated to world-class coaching. What makes Thursday night’s match even more intriguing is that Gareth also happens to be one of Gabriel’s squash coaches. So it’s the student taking on the teacher!”

Gabriel said he’s excited for the chance to compete against his long-time coach and mentor. “Gareth is a tremendous coach, great player, and a very good friend,” he said. “Our match will be a lot of fun and, hopefully, pretty entertaining for the folks coming out to watch us. I’m pretty pumped up to play him.”

A resident of Menlo Park and Menlo School sophomore, Gabriel is regarded as one of the top junior talents in the sport of squash. He’s the first junior player from California to be crowned a National Champion, winning the Boys U15 division as a 14-year-old. This upcoming season, he is again considered one of the favorites to compete for the boys U17 national title. A three-time member of the US. Squash’s National Junior Team (U13-17 squad), he has won numerous tournaments at both the junior and adult level.

A member of the Olympic Club, Morgan earlier this summer was crowned Men’s Open Club Champion, the youngest champion ever in the history of the storied San Francisco club.  A two-sport athlete, Morgan also is a talented junior tennis player  and is a member on Menlo School’s boys Varsity team which, last season, won the Northern California high school tennis championship.