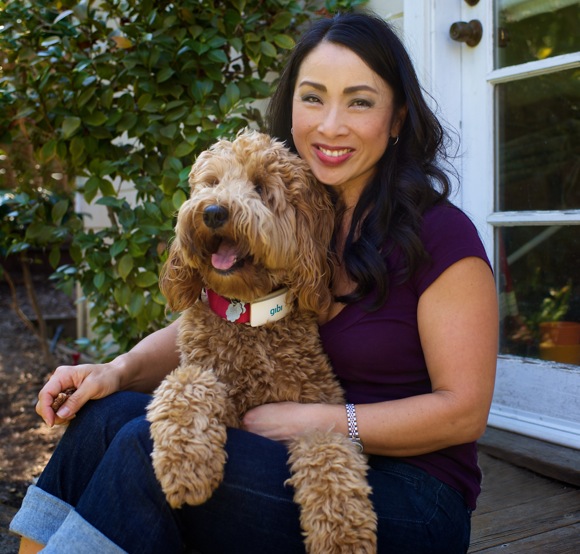 Anyone seeing Synette Tom walking her apricot Labradoodle around West Menlo Park might think the dog’s name is Gibi. At least that’s what the dog’s seriously souped-up collar says. In fact, the scruffy pup’s name is Kale (Hawaiian for “Charlie”), and Gibi  is Synette’s GPS pet locating device that’s currently drawing the attention of the world’s largest retailer.

Back in July, Walmart solicited “Get on the Shelf” contest entries from inventors and small business owners eager to make their products available to its millions of customers. Selected from a pool of thousands, Gibi is now one of 20 finalists in the Walmart contest.

This week, the top four products in the Great Gadgets category  face off in an online vote with the winner vying for the contest grand prize. At stake: pre-orders from Walmart.com and vital marketing support — the stuff of dreams for a fledgling start-up. 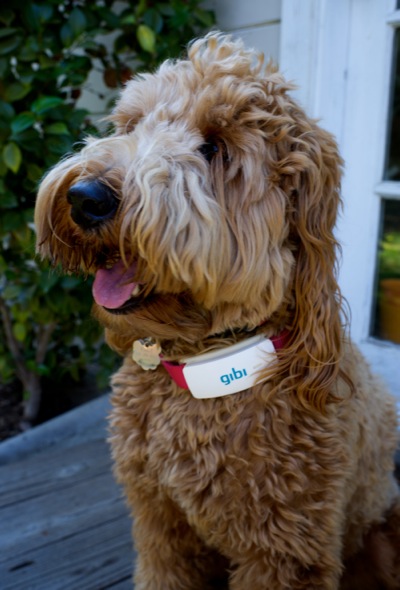 Before Synette found herself in the spotlight of a national contest and ABC World News coverage, she was a transplanted Hawaii native in Menlo Park, working feverishly to get her new business off the ground. “I was in the satellite industry for quite some time and wanted to do something new,” she said. “All my life I’ve wanted to start my own company.”

As an electrical engineer, Synette designed electronics for communications satellites, which eventually led to system design and business development. Back in 2005, she was recruited to the Bay Area by Space Systems/Loral in Palo Alto. While her realtor encouraged her to “get a condo in downtown Palo Alto,” Synette checked out a listing in Menlo Park and immediately thought, “this feels like home.” When she left Space Systems/Loral in 2009, her Menlo Park home became her startup home base.

Synette says her transition from satellite technology to dog tracking devices was a natural one. “Growing up on a small farm on the windward side of Oahu, we had a lot of dogs, cats, guinea pigs, geese, chicken, ducks, you name it,” Synette said. She brainstormed the idea of a tracking device for family pets with her sister (and Gibi co-founder). “She said, ‘With your background, you know you can do it,’ and I was like, ‘Yeah, you’re right.’”

Watching her former Space Systems/Loral boss suffer through the trauma of a missing pet further cemented the idea. “He and his wife were driving up and down for seven days looking for their dog. He wasn’t going to work,” she said. “They eventually found the dog in a neighbor’s garage. He could have gone to our app, boom ‘where’s Fido?’ and instantly known he was at the neighbor’s house versus seven days of worry.”

As Synette points out, one in three pets go missing in their lifetime, and four million are euthanized every year because their owners can’t be identified. Menlo Park is no exception to the lost pet phenomenon, as witnessed by the steady stream of postings for help on Nextdoor.com.

“Dogs are super, super smart, and there are so many ways they can get loose,” Synette said, confessing that even Kale successfully executed a great escape. “It’s just really scary. We thought our gate was locked tight, but he kept banging on it until it got open.”

While competitive pet-tracking technologies exist, Synette says Gibi is sleeker, technically superior and fits any collar. “People can go, ‘Where’s my dog?’ and just press the button on their app on their smart phone or computer and instantly they know where their dog is within 10 foot accuracy.”

Gibi (pronounce like Andy Gibb-y) is at the alpha prototype stage, but thanks to Blue Startups, a Hawaii-based venture accelerator, along with additional investors and friends and family funding, Synette has raised enough money to target mass production by next April.

As for the Walmart contest, it’s now up to America’s vote. If Gibi fans cast enough online ballots October 14-17, Synette’s pet-tracking technology will “get on the shelf.” Beyond that? “We have a great product to help people find their pets. We know there’s a market out there, and we plan to nail it,” said Synette.

This looks exactly like the Tagg Pet Tracker (www.tagg.com) we have for our Corgi. Did you get the concept from them? How are you different?

Hi Jason — Sorry, Gibi is not exactly like Tagg. We purposely designed and developed a significantly better product. Gibi devices attach easily and securely to most 3rd party collars. Gibi is IP-67 waterproof , high quality, reliable and accurate. Batteries are designed to last 7 days for sure. Gibi will not corrode. We feel competition is a good thing. It is awesome that big companies like Qualcomm think there is a business. Qualcomm started Tagg. Consider Google, it wasn’t the first search engine, but it is certainly TOP DOG. Would love if you tried Gibi for your Corgi and let us know what you think. Thanks and best regards! …Synette

What a cool product. Sure hope it makes the Walmart cut. It has my vote. Great to see a local business woman do well.

Too bad i’d have to join fb to vote for it. It’s definitely something I would use.

Thanks for your interest in Gibi. Sorry to hear that your husky gets out occasionally, but statistically it is expected that 1 in 3 go missing in their lifetime. Gibi is designed to put the power of finding your pet in your hands with the push of a button and eliminate the wait and worry.

On the Gibi app, you can create a Safe Zone, around your home or where you expect your dog to be such as a day care or park. We will monitor the Safe Zone and let you know if your pet has left the Safe Zone. These Safe Zones can be just about any polygon.

Hope this answers your question. Let me know if you have more.

Thanks and best regards,
Synette

Synette,
Congrats and best of luck, we should all hooked up at ‘’Luttickens after 5’’ one Saturday night. Great tunes, just heard South of Manhattan there last week.
Tim and the SSL gang.

Thanks Tim! Looking forward to meeting up at Luttickens after 5 one Saturday night! I’m in Honolulu, Hawaii for Blue Startups now. Blue, Hawaii’s only venture accelerator, selected Gibi for their Fall cohort. Be back home in Menlo Park after the program. I am thankful and fortunate to live in wonderful places. Aloha and mahalo! …Synette

The description says that the gps tracker can attach to any collar. Is it small and light enough to be worn by cats? I have a little escape artist on my hands…

Hi Meaghan, we understand that people are particular about their pet collars. We designed Gibi to fit most third party collars found in the pet aisle, including ones with thin or thick width and quick release clips. Gibi will fit well on larger cats. Thanks!

I am very excited about this. My dog was lost 2 days ago for over 12 hours…. This sure would have been great to have. When will this be available and will you be offering other color options. I’ll be sure to comment back as soon as I get it and can try it.

Hi Shirleen, thanks for your interest in Gibi! Glad you found your dog before anything bad happened! A few weeks ago, my neighbor’s lab got out on the street and hit by a car that dragged him to Alameda De Las Pulgas. Hit and run incident. We all went to look for him and could not find him. He was found the next morning laying and bleeding out in a yard several blocks away. He is lucky and is recovering from very serious wounds. Gibi is now available for pre-order at Walmart.com. Here’s the link http://www.walmart.com/ip/Gibi-Pet-Location-Service-GPS-Unit-with-three-months-service-included-Dogs/31031378. We are on target to deliver Gibi’s in May. You will soon be able to purchase at gibitechnologies.com too. Hope to see you at on our walks. Thanks! ….Synette

Synette,
I don;t see anything on the web site about a monthly service fee like the other pet gps systems (Tagg, Garmin, etc). I am looking for a Pet GPS for my husky that gets out occaisonally even with a fence and invisible fence.

Thanks for your interest in Gibi. Sorry to hear that your husky gets out occasionally, but statistically it is expected that 1 in 3 go missing in their lifetime. Gibi is designed to put the power of finding your pet in your hands with the push of a button and eliminate the wait and worry.

On the Gibi app, you can create a Safe Zone, around your home or where you expect your dog to be such as a day care or park. We will monitor the Safe Zone and let you know if your pet has left the Safe Zone. These Safe Zones can be just about any polygon.

Hope this answers your question. Let me know if you have more.

Thanks and best regards,
Synette

I am looking for this type of dog tracker. I need one that will transmit for at least 3-5 miles, work on the Apple or Google maps on either or both, iPad and iPhone 6, and works in real time as well as keeping a record of where he has been. I wonder if someone can get back to me on whether this invention is capable of these needs. I have a Dobberman that wanders over 18o0 acres and I am trying to find out where he goes. Also, it would be great if I could call him home while he is wandering.