As parents, what can we do about boys not being engaged at preschool? 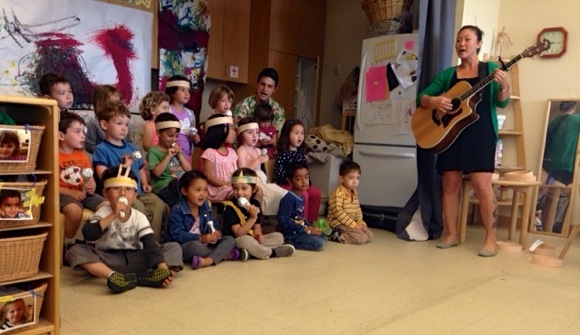 My 4-year-old, Leo, gets practically nothing out of preschool. His two older brothers, now in 3rd grade and kindergarten, got very little out of it as well. It’s not that they hate it or really miss Mommy or Daddy.

I’m certainly willing to believe that many — perhaps millions — of boys have great preschool experiences, but there are also many, many boys like mine.

My boys just haven’t “clicked” with their preschools. Sometimes, they engage in activities, but not with any zest. Other times, they just stand around and watch. They’ve never made good friends there. They bring home countless cute art projects, but they quickly forget about them minutes after getting home.

(In the photo, Leo’s on the lower right, in a yellow shirt, staring off into space, as his preschool teacher plays guitar and other kids sing.)

Also, to varying degrees, all my boys’ preschool teachers have found fault with their “social and emotional development.” Leo’s preschool teacher has given us a strong recommendation that we “redshirt” him next year and send him to a Young 5s program.

This sort of diagnosis for preschool boys is quite common, according to David Ackerman, the principal of my older boys’ elementary school, Oak Knoll Elementary School in Menlo Park. The commonly held notion is that preschool-aged boys are a lot less mature than girls at the same age, so they’re less ready for school.

Ackerman bristles at this notion. “If you said the identical thing about African-American kids or girls, you’d be heavily criticized. Somehow, it’s become acceptable to blame boys. Why is it their fault? Why aren’t we blaming schools instead for not understanding how do deal with boys?”

While it’s difficult to ignore Leo’s preschool teachers’ warnings, I agree with Ackerman. As a former boy, I also agree with Leo. His preschool’s not that interesting, at least when I compare it to our house.

Leo engages far more deeply in play at our house, and he’s a lot more social with kids, both his brothers and the neighbor kids and friends who come by practically every day. Certainly, home is often the most comfortable place for kids, but I think there’s another important difference between our house and his preschool.

Our house is “boy heaven.” Its play facilities, as well as its culture, were shaped first by a big boy (me) and then are continually modified by Leo and his big brothers. So, for instance, Leo and his brothers are constantly building big things with wood, chair cushions, rocks, etc. Their structures are frequently unstable, so they frequently fall.

My boys also climb anything and everything, including a huge playhouse in our back yard which has rock climbing toeholds to invite climbing. They jump from the playhouse to our trampoline, scaring the daylights out of pretty much every parent who comes to our house for the first time (after a while, they all get used to it). They ride various wheeled vehicles as fast as they can on our driveway, sidewalk, and yes, our street, too. They play ball games and other games, and they compete to win.

On the other hand, Leo’s preschool is different. It’s very safe, and totally non-competitive. Everyone in any position of power there, from the teachers to the most involved parents, is a woman. Kids there dress up in costumes and paint and hop and play with blocks and Thomas the Train sets. They sit at the snack table and take turns. They sit in front of the teacher and sing songs at the end of every day.

There’s absolutely, positively, nothing wrong with Leo’s preschool. It’s a very healthy, happy place where a lot of important learning happens. I would love for him to love it there, but he doesn’t. He couldn’t care less, so I’ve struggled to understand why.

I think I understand pretty well, but I don’t know what to do with that understanding. Boys are doing far worse than girls at schools these days, and schools’ cultures increasingly prohibit activities that are unsafe or competitive.

My wife and I aren’t about to spend the time to homeschool our boys. What do we do? Other parents of boys — what do you do?

Menlo Park resident Mike Lanza is the author of Playborhood

We have an almost 4 year old son and 3 month old son. I love the questions and observations you raise. Our older son is in his second year of preschool and I can see his “boy ness” is definetly ramping up. So far our strategy has been extra activities like swimming and gymnastics. He still seems engaged at his preschool, which we as his parents love but your article has inspired me to pay attention to his boy needs being met in the coming year. Thank you!

The author doesn’t indicate how his older boys are adjusting to school now. Presumably better now that there is a male authority figure? He talks about preschool behavior and then generalizes to all boys in all schools. Does Mr. Lanza have any girls? Did they conform any better to the preschool “feminine” ideal? Is it any great mystery as to why a kid who’s father feels his school is uninteresting will find the school uninteresting himself? Any other preschools available? Why not set up one in boy heaven!

I’d rather read news about Menlo Park on inMenlo than this pseudo child psychology. Lanza already has a website to push his book.

The picture, is this a group performance? Perhaps with many parents or other adults watching the children perform? I am a preschool teacher and director with over 25 years of experience and I find that when children are “forced” to perform it puts undue stress on them. Which results in “zoning out”, misbehaving, crying, etc.. If you are unhappy with your son’s preschool then I would strongly suggest you look for another school. Not all classrooms, teachers, children are a good fit.

Laura – My oldest son, a third grader now, has encountered a few boy-related issues in elementary school. He has an attention issue that’s very common for boys, so, for instance, his teacher’s writing assignments – essentially, “write whatever you want about your life” – have been a total disaster for him. He needs a lot more structure.

Secondly, no, I have no girls.

Regarding your contention that I find school uninteresting, actually, I loved school as a kid, especially once I got into high school. I’m describing what I see today of how my boys deal with school.

Regarding whether other preschools are available, we’ve surveyed quite a few, and none really fit my boys.

Regarding setting a preschool up in “boy heaven,” I’ve thought about it a few times, but, well, that would be *very* time-consuming. It would be the first step down the path of homeschooling.

Too bad you don’t live in Urbana, IL. My 4’s class would be a great environment for your son.

Too bad you don’t live in Urbana, IL. My 4’s class would be a great environment for your son.