Spirit of Uganda returns to the Peninsula on January 17 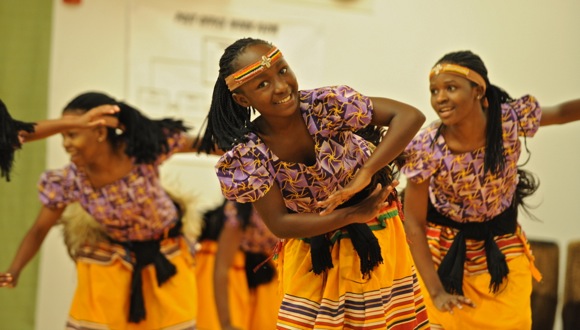 Menlo Park resident Elizabeth Ourens has been involved with this group for over a decade and has updated InMenlo about their 2014 local appearance.

“I first saw this group perform at Stanford in 2001, and have seen them every other year when they are on their US tour and come to the Bay Area.

“On their last tour in 2012, they performed at Encinal School (pictured) during the day as part of our Cultural Arts Day and at MA-PAC in the evening to a sold out audience. I was disappointed that the MA-PAC was not available this time but thankful that a student at Sequoia High School, Nani Freedman, wanted to help organize them at her school.

“I am so thrilled to be able to help organize this event as a volunteer (as in 2010 and 2012) and want to try to help get the word out so that people will know about this great opportunity for their family to experience the joy and beauty of African music, dancing, and stories.

“They will appear on January 17 at 7:00 pm. Tickets can be purchased online.”

Note:  This performance is organized by and benefits Empower African Children, a 501(c)3 non-profit, dedicated to creating transformative and globally connected learning experiences, preparing orphaned and vulnerable children for a lifetime of influence.