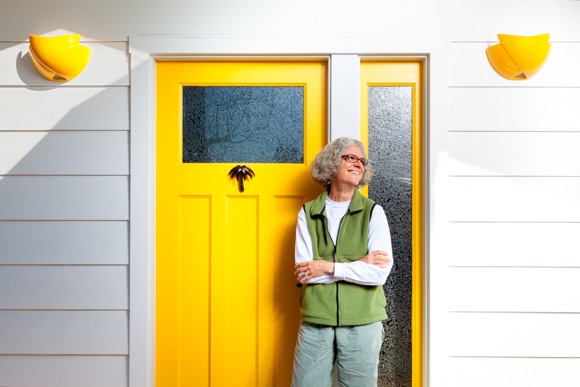 Buying a house in Menlo Park, only to tear it down and rebuild, is not uncommon. But that’s not what Erin Craig was looking for when she purchased a home near Burgess Park two years ago. She shopped exclusively for a house where there was room enough on the lot to build an accessory apartment, also known as a secondary dwelling unit.

“We have an adult daughter with severe disabilities,” Erin said. “We thought a lot about the kind of living arrangement where she could have more independence but would also accommodate the full-time support she needs.

“You see a lot of extended family living situations where a person has a sink and microwave. That’s not what this is. This is a fully- functioning living unit. And it’s completely legal — that was important to us.

“This can  be a permanent solution for our daughter. For example, if we were to die, she could move into the main house, and her caregiver could live in the accessory unit.”

Erin called on a local Bay Area company, New Avenue, to assist with design, permitting and construction. The company focuses exclusively on projects that make a home better suited for living with grandparents, returning children, friends or tenants and recently earned a spot on B Corporation’s ‘Best for Communities List’.  A Certified B Corporation is a new type of company that uses the power of business for good and meets rigorous standards of overall social and environmental performance, accountability, and transparency.

Erin explained that the house and lot worked because it’s on a corner and had an odd shape. “The unit is where the garage was,” said Erin. “It’s 640 square feet — that’s what the city of Menlo Park allows. There was room to put a new garage on the other side of the main house.”

While visiting with Erin, we toured the spacious and well laid out unit before walking outside to its separate front porch, which has two bright yellow sconces on either side of the door. “There from a family owned business called A-19 that makes ceramic lighting fixtures,” she said. “I just fell in love with the color, even though people told me that it was a bad color to paint the front door. When it fades, we’ll just re-paint!”