At a stately 6’3”, Menlo-Atherton girls’ varsity basketball coach Morgan Clyburn is used to standing out in a crowd. “I was always the kid where everyone’s heads were here,” she said, gesturing below her chin, “and I’m about a foot above them in every single photo, every single year. My Mom is 6’1”, my Dad is 6’4”, and my brother is 6’8”, so it was pretty destined to be.”

Destined to be tall, and destined to play basketball, it seems. “Basketball has been a love and a passion for me since I was 8 or 9,” Morgan said. “It has always been there. It’s something I can fall back on when I’m frustrated and I can do when I’m happy. It’s a wonderful part of my life.” 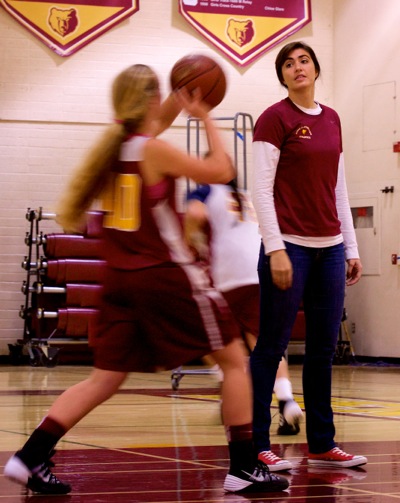 Growing up in Houston, Morgan started out tagging along at her older brother’s practices (“if they had 9 players, I would hop in”), played in all-boys leagues in junior high and then on nationally ranked teams through high school. When it was time for college, she brought her game to California.

“I knew in professional women’s athletics, even if you are the best of the best of the best, you are still not going to be able to sustain a living off of just your athletic abilities,” she said. “I was looking for a great combination of athletics and academics and thought Stanford was it.”

Morgan entered Stanford determined to juggle the demands of a rigorous major (biomechanical engineering) with a  top-ranked Division I basketball program. “It was incredibly difficult. When I came to college I didn’t really know what challenging meant,” she said. “I didn’t really want to sacrifice either. Which is kind of if you look at where my life is now, I have the same issue. I don’t really want to give up either. They are both the love of my life.”

Whereas Morgan’s balancing act was once academics and athletics now it’s a successful career and coaching. In her day job, she’s a senior development engineer with Autonomic Technologies, a medical device start-up developing implantable neuro-stimulators to treat cluster and migraine headaches. “The cluster headache which I’ve been dealing with primarily is known in common vernacular as the suicide headache. It’s one of the most painful diseases known to man,” she said. “I think feeling that what I do matters is a really important thing.” 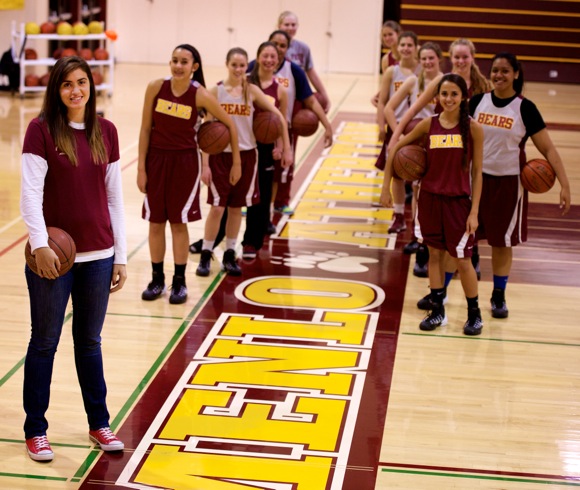 When Morgan learned about the M-A coaching opportunity in 2012, she had to really scrutinize her busy schedule. “Once I saw that I could make it work, I applied for the job, and here I am. It wasn’t something I actively pursued, but I’m really happy people thought of me when it became available,” she said.

Back for her second season with the Bears, she said she constantly draws from both the positive and negative experiences in her own basketball career. “I always didn’t like it when coaches would just yell for the sake of yelling like ‘try harder!’ or ‘play stronger!’ instead of actually giving players instruction on what to change. I try really hard to give them really concrete descriptive feedback.

“Some of those lessons they learn on the court can help them in their real life too—giving girls a sense of what it means to be part of a team, goal setting, responsibility, accountability. When they think that they’ve given their all, that there’s usually a little bit left in the tank.”

Now firmly entrenched in the Menlo vibe—between coaching at M-A, working off Marsh Rd. and living with three housemates in East Menlo Park—Morgan encourages the community to come out and catch a game this season. “The girls are willing to take it at people just as much as guys are. They’re not playing scared,” she said. “It’s a really fundamentally sound game overall. The girls may not be able to run quite as fast or jump as high but because of that they have better skills in order to score.”

Footnote: The M-A girls just wrapped up the pre-season with a 7-3 record and will begin league play today with an away game at Burlingame. They’ll be home against Sequoia on Friday, Jan. 10 at 6:15 pm and at Sacred Heart Prep in Atherton on Saturday (1/11) at 1:30 pm