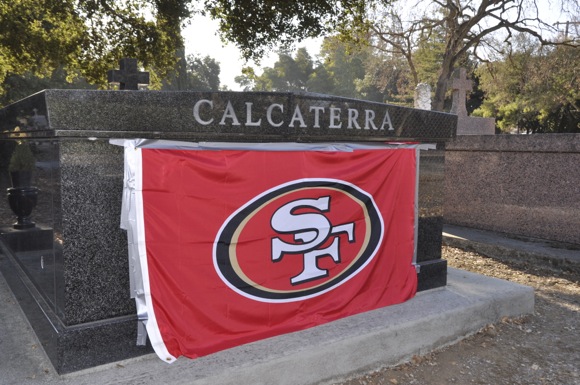 Ralph Calcaterra’s grave marker is, under ordinary circumstances, easy to spot, standing as it does near Santa Cruz Avenue at the Holy Cross Cemetery in Menlo Park. But last week it become even more eye catching with the addition of a large San Francisco 49ers flag displayed on one side.

According to Mr. Calcaterra’s obituary in the Almanac, the longtime Atherton resident, who died in 2011 at age 93, was an avid Niners fan.  As slight underdogs in this afternoon’s NFC Championship against the Seattle Seahawks, we figure that the local team will benefit from all the rooting power it can get, even from beyond. Go Niners.