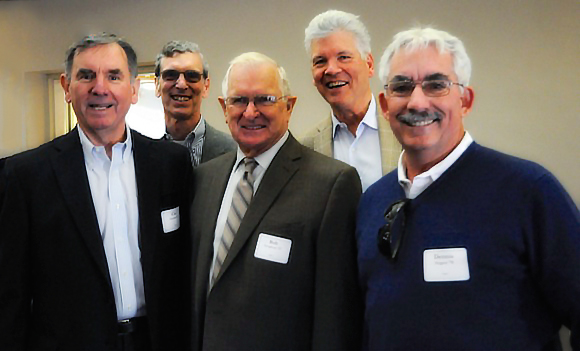 Former M-A swimming and water polo coach Bob Gaughran, who has garnered many accolades over the years both as swimmer/water polo player and coach, added another one this weekend. His alma mater, the University of Pacific, recognized him with the Amos Alonzo Stagg Award of Merit, given to alumni who achieve distinction in their professional lives through the examples of integrity, dedication, idealism, and team spirit that Stagg personified. (Stagg coached football at Pacific from 1933-46.)

On hand to celebrate were a number of Gaughran’s former M-A players, including from left to right, Clay Clement (’61) Jim MacKenzie (’63), Coach Gaughran, Dave MacKenzie (’61) and Dennis Nugent (’66). Clay, Jim and Dennis also competed at Pacific.

“My years at Pacific gave me the knowledge and skills for my coaching and teaching career,” said Bob in his remarks to the assembled supporters. “I’m not deserving, but I’ll take it and run. Thank you.”

Bob graduated from Sequoia High School before going first to Stockton College and then receiving a swimming/water polo scholarship to the University of Pacific, where he proceeded to break all game, season, and career water polo scoring records.  His Pacific career total of 340 goals remains the school record.

A member of the Menlo-Atherton High School Hall of Fame, two of his high school swimmers won Olympic medals; one — Dick Roth — while still in high school. The other was Greg Buckingham; little brother Lindsey also swam for Jim, although he is said to have always been more serious about his guitar than excelling in the water. (Lindsey and fellow M-A alum Stevie Nicks are best known as members of Fleetwood Mac.)