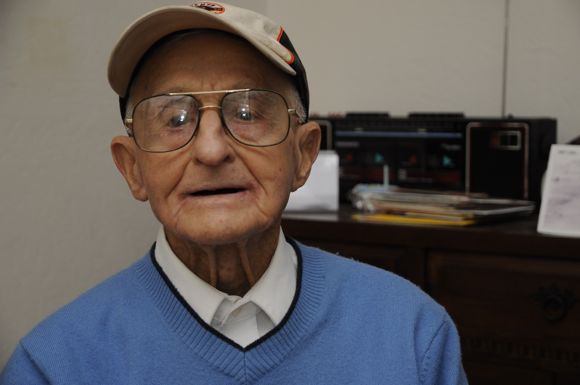 Tomorrow — January 30, 2014 — Atherton resident Lou Matis turns 100 years old. As has been the custom, his long-time neighbor Doug Anderson organized a party at Harry’s Hofbrau last night that brought together dozens of Lou’s friends and family. His Model A Club — yes, Lou loves “cranking up my Model A and going for a tour with my buddies” — is honoring him later this week.

It’s justifiable fuss for a man who still has a twinkle in his eye and a sound mind and body, although a recent bout of pneumonia has set him back — but just a bit. He’s outlived his five siblings, his wife of almost 50 years, and one of his two daughters. He lives alone on a quiet Atherton street in the house he moved into in 1972, where we visited with him in advance of the planned celebrations.

The obvious question: What’s the secret of his longevity? 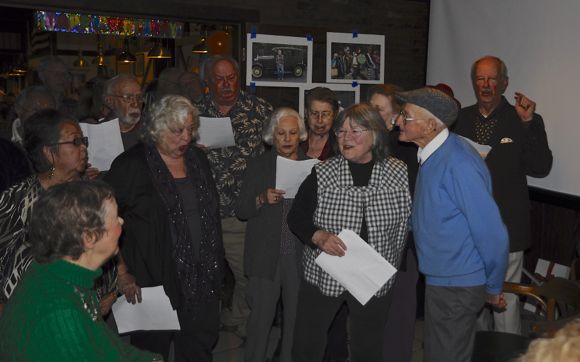 Lou is not now, nor has he ever been a sit-around-the-house kind of guy. He quit Balboa High School during the Depression so he could help support the family. He had a long and successful career as a carpenter/builder.

“In the evenings I used to study on my own,” he says, referring to his lack of formal education. “I took some night classes. Call it a bit of native intelligence. I was successful in my line of work.”

A fervent San Francisco Giants fan — and before that a Seals fan — Lou still gets to a few games a year. He’s also a 49ers fan, as disappointed as the rest of us about this year’s playoff results.

And then there is the singing, much in abundance at the party last night. “We do a lot of music together,” says Doug. The neighbors can be spotted at Esther’s German Bakery in Los Altos the second Thursday of every month where there’s a German songfest. Tuesday nights are devoted to the Happy Time Banjos group.

For a man with plenty of energy, it’s a bit odd to hear him sum up his long life in this way: “I run out of gas when I explain my idea of longevity.”

He is so lucky to have you as a neighbor and a friend!