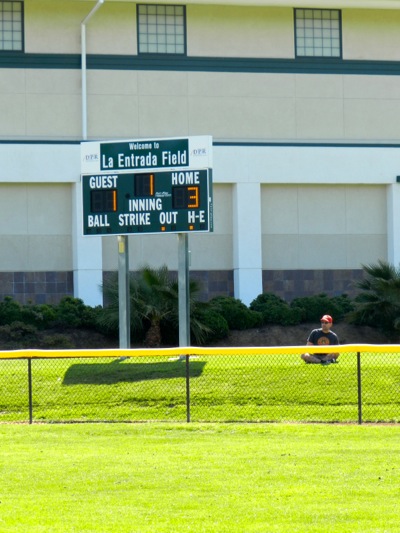 In 2006, Alpine/West Menlo Little League purchased a brand new scoreboard and one of our volunteers, Dave Denier, took on the project of having it erected at La Entrada Field. Since the baseball field is on school property, Dave had to get approval from the California Division of State Architects (DSA) for the work. He enlisted the help of Little League parent, Mike Goldenstein, who is an architect, and with his help, was able to get the project approved. Unfortunately, Dave fell ill and left Little League, and the actual erection was never started.

In the winter of 2013, current Alpine Little League President, Tim Goode received a call from Joyce Massaro of the Las Lomitas School District reminding him that they had been storing the scoreboard in their maintenance yard for all of this time and was Alpine aware that it was there.

Tim asked me to take on the project of getting it installed. Through the contacts of Little League coach TJ Bianchi, I was able to enlist the help of Oakland-based architect John Seals who graciously agreed to take on what turned out to be an extremely daunting task of receiving DSA approval. I must have called 10 local architects who, once they heard that the project required DSA approval, declined to get involved.

Meanwhile, Little League parent Jody Quinton procured a donation of the services of her employer, DPR Construction, for the erection. DPR assigned Menlo Park resident Alan Griffin as the project manager. Alan did all the coordinating of all the excruciating details of the project. In the process, he also solicited donations for the structural steel, electrical work, and the underground locator service, saving Alpine a significant amount of money.

Joyce Massaro and Eric Holm of the Las Lomitas School District bent over backwards to help us get this project approved and shepherded through the DSA process. We believe that without their help, we couldn’t have gotten it done.

The scoreboard was finally erected this February, almost exactly one year from when I took the project on. It took some extra steps to get it in working order, but it’s now functional.

Author of this post, Colin Jenkins, is Treasurer of  the Alpine/West Menlo Little League and the owner of Occasions in downtown Menlo Park

As a long time resident of Menlo Park, I am always so pleased to see how some people are so involved and dedicated to the education of our young people. Hats off to DPR and especially Alan Griffin!!!