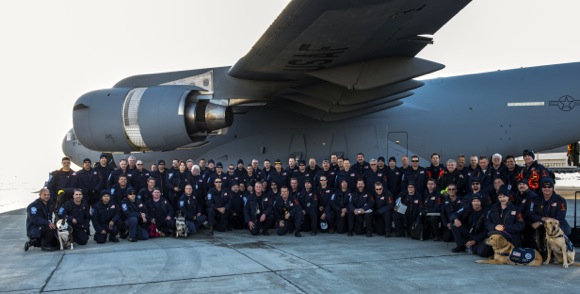 Members of California Urban Search and Rescue Task Force 3 (CA-TF3) sponsored by the Menlo Park Fire Protection District, have been deployed to the Washington state mud slide as part of an overhead incident support team (IST).

Last week, CA—TF3 was asked to fill-in and support “Operation Alaska Shield” which had been in the planning stages for two years and coincided with 50th anniversary of the great Alaskan earthquake. The team replaced the Washington State team with only two days of notice, deploying 72 regional rescuers (pictured) and equipment to Alaska for two days of non-stop operations.

Division Chief Frank Fraone and Rob Patterson from Task Force 3 are being sent as part of a specialized 20 member incident support team (IST) comprised of US&R team members from across the Nation.

Frank Fraone, a Menlo Park Fire Division Chief, who was one of the team members in Alaska last week, is expected to be in Washington for 10 to 14 days serving as the Operations Section Chief on the FEMA IST. Chief Schapelhouman said “the team feels very privileged to be able to offer our support and help.”