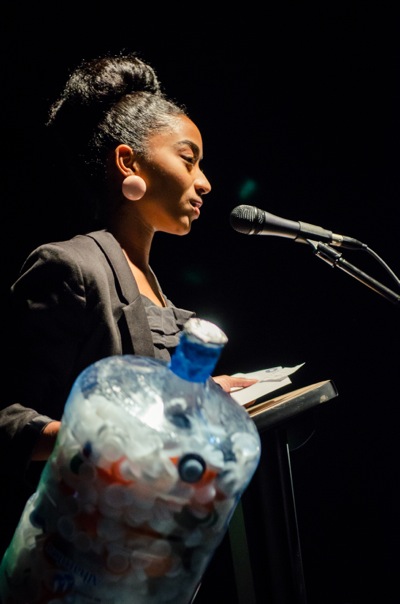 December 27, 2012 is a day Menlo College student Katrina Ford remembers with sadness. It was the day her sister, Brianna, was killed in a car accident in Oakland. Of the five people in the car, her sister was the only one to die. The driver, who was fleeing from the police when he ran into them, is in jail.

Brianna was a student leader and role model at Clark Atlanta University in Atlanta. She was president of the Living Green Club, and brought the concept of sustainability to their campus. She introduced recycling to the college community, planted a garden, collected plastic water bottles from the dorms, and brought awareness to the local elementary schools by teaching them the importance of going green.

Katrina took a leave of absence from Menlo College last spring to deal with her grief. While she was away from college, she realized that she could deal with her loss better if she could honor her sister and keep her legacy alive. Her sister was her number one fan and encouraged her in everything she did so Katrina decided to take up her sister’s passion, the cause of sustainability.

When she returned to Menlo College in the fall, she got to work. The campus had an electric charging station for electric cars, and Zip cars to help students avoid owning cars, but there wasn’t a program to monitor plastic bottle usage and recycling. To initiate her cause, Katrina spoke at the President’s Council meeting on the importance of sustainability.

Her first goal was to ban the use of plastic bottles on campus. Her next project was to organize a group of students to refurbish a squadron of recycling bins. The fitness center has recently installed a new water system so that people can easily fill their own bottles on campus. In the next couple of months, her group will show the documentary, Tapped, on campus that shows why plastic bottles are detrimental to health and the environment. For Earth Day, the group intends to have a “Going Green” fair to support their cause.

In addition to her sustainability efforts and her work for the Black Student Union on campus, Katrina also volunteers as a tutor at the Boy’s and Girl’s Club in East Palo Alto. “One day, I’d really like to help underprivileged students with an after-school program where mentors can enrich their lives by directing them to resources for college, jobs, and everyday life,” said Katrina, who is an entrepreneur major.

Her community-based volunteer work is paving the way for her to realize her dream and to pay tribute to her sister with a meaningful gift for the College — and the environment.