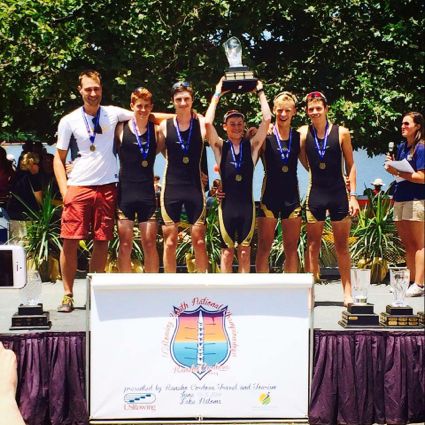 A rowing team from Norcal Crew is the national champion in the lightweight four with coxswain event, winning the gold medal at the US Rowing Youth National Championship at Lake Natoma, CA, last month.

In the six boat final, Norcal defeated Los Gatos Rowing (silver medal) and S.A.C./Capital (bronze medal) with a winning time of 7:11:757. Norcal had a remarkable race and defeated the other crews by more than a boat length of open water, repeating their margin from the qualifying heat on Friday and semi-final on Saturday. In a 2,000 meter race, Norcal took the lead during the first three hundred meters of the race and steadily increased their winning margin.

Forwarded this article to a friend who replied:
“Wow! Thank you for thinking of me and forwarding this! I see that his team rowed their 2,000 meter race in 7 minutes, 11 seconds. As a former rower, I can tell you that was 7 minutes and 11 seconds of sheer agony….but so exhilarating when they finished first! My heart, lungs, legs, and back feel each stroke they took.”