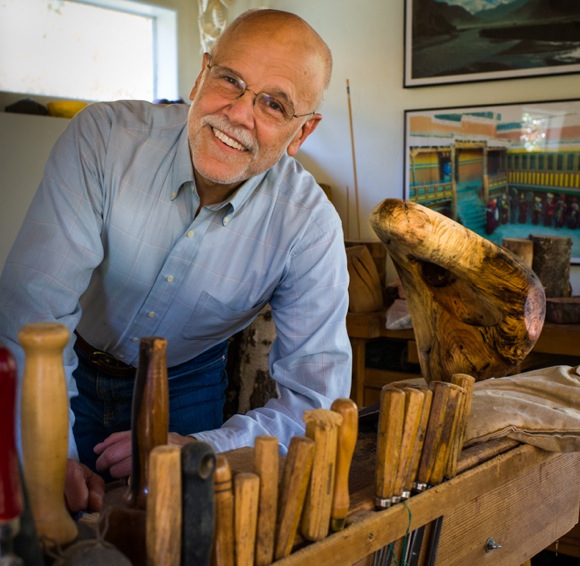 Menlo Park resident Bob Harris’s interest in sculpture came early in life. As a boy, he used to carve wooden ships. He continued sculpting while in college, eventually abandoning it to pursue medical school.

A psychiatrist and psychoanalyst by profession, the Stanford Medical School-based doctor returned to sculpting later in life. “In some ways, I see my sculpture as an extension of what drew me to psychoanalysis, an interest in inner states and their hidden potentials. As a living material, wood is especially suited to evoke reflections on the processes of life — growth, sexuality, death, transformation — and development over time,” he writes on his website.

When we arrived for a visit at his artist studio behind his Menlo Park residence, we were pleasantly surprised to learn about his latest passion: the psychology of religion. “For the last couple of years, I’ve gotten involved in a research project that Stanford archeologist John Rick is doing at the World Heritage site of Chavín de Huántar in Peru,” he explains. “It’s a religious site that existed from 1200 BCE until about 400 BCE. It consists of long hall-like rooms called galleries. It was very dark and people there would have experienced sensory deprivations.

“John’s idea was this was a place that had been engineered to produce psychological experiences for people brought there to be introduced to a cult. He told me he wanted to learn more about the psychology of religion, which is why I got involved. I had a lot of clinical knowledge about religion but not research knowledge.”

Bob visited Chavín de Huántar for two weeks last summer. “Rick got a Templeton Grant oriented around the idea that the desire to engender experiences that can be called “religious” led the leaders of Chavín to develop advanced techniques of construction, of water management in the form of underground canals, of sound management in the form of interior spaces that amplified the specific wave lengths of sound emitted by their conch shell trumpets, of the management of light in the form of deeply-buried interior spaces lit through long ducts by handheld mirrors, and of the husbanding and processing of hallucinogenic plants. Thus, religion, which we often think of as a conservative influence, at Chavín seemed to drive diverse forms of innovation.”

Even with his new interest and his continuing medical practice, Bob hasn’t given up sculpting completely. “For a long time sculpting was a half time job,” he said. “For a while I wasn’t making any figures, just abstracts. But I’m finding myself getting back to figures. I look at the grain in the wood to see if it suggests what the end piece might be. I often work from found wood. That lures me back into my studio.”