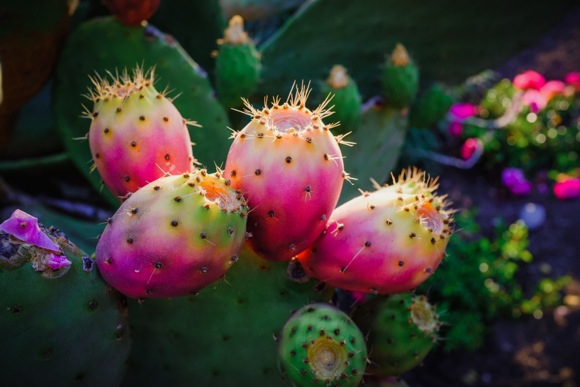 Editor’s note: Our chance encounter with a blooming prickly pear cactus on Middle Avenue in Menlo Park led to photographer Scott Loftesness stopping by to get new (and better) photos and then a visit with the plant’s owner Connie Pasqua.

Talking with Menlo Park resident Connie Pasqua, we got answers to a number of our questions about her prickly pear cactus (Opuntia ficus-indica) that is currently in bloom. For one, if the City had had its way there would be no prickly pear. 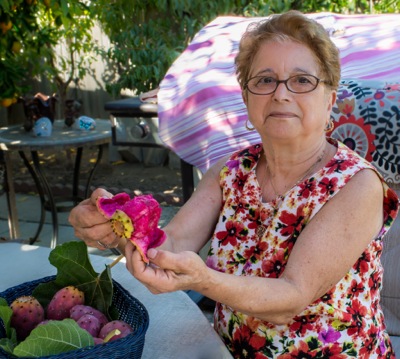 “We had a tree that was leaning out over Middle that needed to be removed,” she explained. “The City wanted us to plant another tree, but we had an orphan prickly pear that we thought needed a good home. So we planted it.”

She also explained that the now almost 20-year-old plant is more visible this year because there used to be bushes in front of it that were removed five months ago.

Connie said her cactus has fans: “People stop by and ask for pieces. A lady from Woodside pulled over one day and asked to get a starter. And some people have asked for the leaves to feed their turtles.” 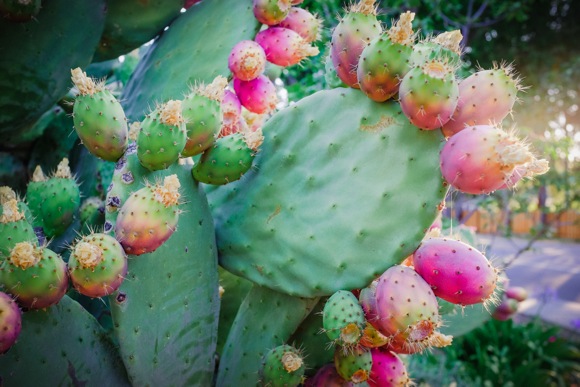 The prickly pear fruit is edible. They have a texture a little bit like a watermelon. According to the Mayo Clinic website, prickly pear cactus “…can be part of a healthy diet… it is high in fiber, antioxidants and carotenoids.”

Connie is also fond of making juice: “I squeeze them, and the seeds kind of break down. Then I strain it and freeze the juice for future use.”