This article was written by Natalie Silverman and Lexi Lobdell: it first appeared in M-A Bear News. 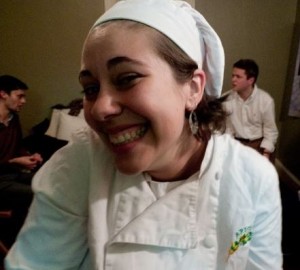 New AP English composition and English III teacher, Shannon Kirkpatrick, enthusiastically began her new job on campus this August. From pastry chef, to teacher of German, Italian, and English, she has made her way to Menlo-Atherton.

Kirkpatrick started out as an undergraduate at Whitman College in Washington. From there she traveled to Italy for a year to pursue the making of better desserts. She worked two years at a French bakery and an Italian restaurant as a pastry chef. Later, she attended St. John’s College to obtain her master’s degree in liberal arts. Finally, she finished her education and received her teaching credential at Stanford University.

In addition to baking delicious pastries, Kirkpatrick can also speak German and Italian fluently. While she admits she could not hold a conversation about nuclear physics, she can easily engage in more colloquial exchanges, and taught both languages at a Portland community college before getting her high school teaching degree.

Before coming to M-A, Kirkpatrick taught AP English language and AP English literature for three years at Everest High School in Redwood City. Her teaching style includes a positive and casual atmosphere. She plans on promoting a conversation in class so people feel comfortable expressing and expanding on their own and fellow classmates’ ideas.

Her advice to her students would be to put effort into small assignments that will help greatly later on. Kirkpatrick confirms that “it will pay off in the end and you’ll be way better and more confident.”

Kirkpatrick is excited to teach at M-A, and this is her first experience teaching at a school with over 2,000 students. Her first impression of M-A was that it is “huge, but in an awesome way” with many activities and “infinite opportunities.”