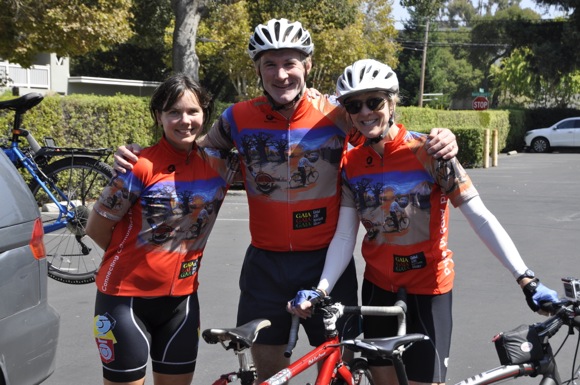 Trinity Church members Steve Andrew (center), Kathy Engelmann (right) and Katie Behroozi could be spotted around the mid-Peninsula today as they took turns pedaling a GAIA bike ambulance, a replica of similar bikes used every day in rural Africa to transport critically ill patients across dirt roads to the nearest clinic or hospital.

Their goal was to raise awareness about the Global AIDS Interfaith Alliance (GAIA), a California-based non-profit organization providing basic health services in AIDS-stricken rural communities in Malawi. In the fall of 2013, Trinity Church began a three year sponsorship of Magombo village.

“The bike relay is an effort to underscore the need for more healthcare workers and better access to critical care in Sub-Saharan Africa, a problem made glaringly evident during the current Ebola outbreak in Western Africa” says GAIA Senior Program Officer and Trinity Church member, Laurie Hunter.

Nearly 2,000 miles away from the epicenter of the Ebola outbreak, Malawi grapples with a dearth of trained healthcare workers as it responds to a devastating HIV epidemic. GAIA is working to stop AIDS in its tracks by connecting rural Malawians to critical care by traveling “the last mile” to deliver healthcare to remote villages.

Each of a fleet of seven GAIA Mobile Health Clinics with the help of The Elizabeth Taylor AIDS Foundation sees an average of 150 patients per day, at a cost of three dollars per patient. In addition, GAIA’s Villages Program has operated in 177 villages across Malawi to date where local women are trained as Community Caregivers providing health education, youth engagement, orphan and hospice care.

Bravo – great work for a great cause! Thanks riders!