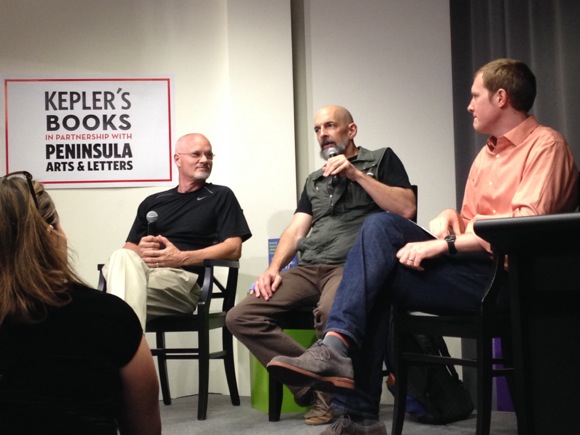 Author and game designer Neal Stephenson (picture center) was at Kepler’s in Menlo Park last night, part of the book store’s Peninsula Arts and Letters series. Stephenson writes what is described as “speculative fiction.” His Wikipedia entry explains: “His novels have been variously categorized as science fiction, historical fiction, cyberpunk, and “postcyberpunk.” Other labels, such as ‘baroque,’ often appear.”

Emails Menlo Park resident John Donald: “It’s part of an ongoing online conversation at http://hieroglyph.asu.edu. Annalee Newitz and Charlie Jane Anders who contributed to the book were also there — they were very engaging. The other man with Neal Stephenson is Dr. Keith Hjelmstad of Arizona State University, and they discussed potentially building a tower as tall as 20 km high. This is referred to as the Tower Project on the ASU website. Rudy Rucker, award winning sci fi author and mathematician, Annalee, and Charlie Jane were discussing their visions of the future, which were refreshingly optimistic.”

Upcoming events at Kepler’s include a Book Swap on Sept. 13th at 6;30 pm and  and best-selling author Gail Sheehy on Sept. 25 at 7:30 pm; tickets for Sheehy can be ordered online.