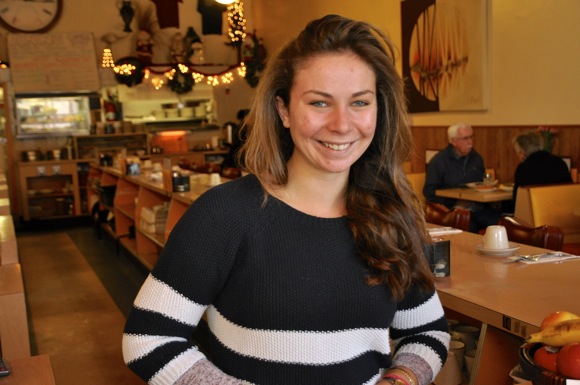 Ann Gilbert opened Ann’s Coffee in Menlo Park in 1946, making it one of downtown’s oldest continuing establishments. Three different owners have carried on her legacy by enhancing the menu but never removing any items or straying from her original recipes. Ann’s still possesses paintings from the 1960s, which embody a unique style, admired by many customers.

Current owner, Nicki Poulus, bought Ann’s in 2008 and has made an effort to preserve many aspects of the restaurant. However, she and her son decided to implement a few minor changes, including opening Ann’s on Sundays. They discovered that this additional day had a positive outcome, as Saturdays and Sundays are now their busiest days. In spite of the restaurant’s relatively small capacity, the staff members at Ann’s work hard to reduce the wait time, which on a busy day, is an average of ten minutes.

Poulus describes Ann’s rare characteristics. Unlike numerous restaurants on Santa Cruz Avenue, Ann’s is not part of a chain and the staff members “cater to the customer’s needs.” Ann’s takes great pride in servicing its clients and is happy to alter its menu in order to create a better experience for the customer.

This strategy has obviously proven successful, as some families have been eating at Ann’s for as many as three generations. Diners consist of business men and women grabbing a bite to eat before their meetings and large groups of students who need to eat before various sporting events. During the weekends, many loyal Ann’s customers can be seen waving across the restaurant, greeting one another.

Ann’s is open seven days a week, and constantly serves breakfast. Cooks prepare meat and fruits every morning, fresh and ready for enjoyment. In addition to these items, Ann’s offers a variety of breakfast dishes, the most popular being the French Toast and Pancake Combo, served with eggs, and a choice of bacon or sausage.

Two soups are cooked each morning, their components varying from day to day. One unique aspect of the menu, praised highly by Poulus, is the Roast Turkey with Dressing, served with other Thanksgiving delicacies.

According to Poulus, the staff is “like a family. We are friendly, and we help each other.” The head cook has been a part of the Ann’s family for 30 years, and one waitress has worked there for over twenty. Poulus believes Ann’s has become a “landmark of Menlo Park, something that everybody knows.” She plans on preserving the friendly environment among the customers and staff, and looks forward to serving the people of Menlo Park for many years to come.

Elizabeth McColloch is reporter for the M-A Bear News where this article originally appeared; used with permission.

over-priced and mediocre diner food along with terrible service. Ann’s could be a great spot, but it isn’t for those 2 reasons.

We love love love Ann’s! It’s inexpensive, friendly and an institution. I went as a kid and now take my kids as well. Curmudgeons need not go there!

Ann’s is the best place for breakfast in Menlo Park. Food is great and reasonably priced and the staff is very good. Can’t start my weekend days without it.