When Oak Knoll School resumes classes tomorrow, there will be a celebrity in the student body. Fifth grader Mia Wurster is one of the contestants on the third season of MasterChef Junior which airs Tuesday night (Jan. 6) on Fox (Channel 2) at 8:00 pm. Locals can get a sneak peak when she makes an appearance on Mornings on Two during the 7:45 to 8:00 am segment Tuesday morning.

Mia’s mom, Jill, filled us in on Mia’s early interest in cooking: “While Mia has loved to cook since she was 2, she became particularly interested because of her sister Faith with special needs. Faith has cerebral palsy, and our nutritionist recommended several years ago that we remove gluten from our family’s diet.

“Mia did not like the food we began to eat. Rather than complain she became passionate about finding healthy, gluten free options for our family and started to cook them herself. The gluten free diet has really helped Faith, and Mia’s cooking has made it incredibly better for everyone.”

The leap to TV fame began with back-to-back auditions in Los Angeles. “My Dad drove me, and I practiced in the kitchen of the Residence Inn where we stayed,” Mia explains. “For the first round, I prepared an egg and chopped salad, and, for the second, seared scallops and slivered Brussels sprouts with a balsamic glaze.” (For her guests, Mia had prepared a baked chicken breast with roasted peppers accompanied by broccoli and mashed potatoes, the same menu she was serving her family that evening.) 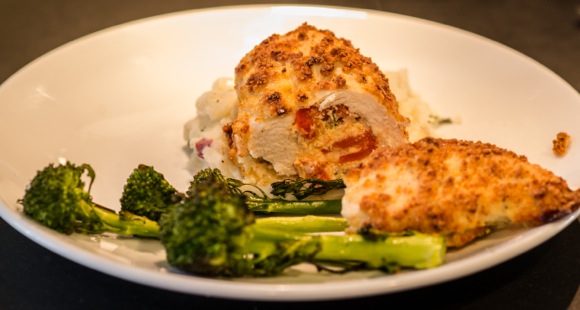 It was some months later that she learned that she was selected to be one of the 19 contestants on MasterChef Junior’s third season, which was taped last year. How she does on the show is, of course, a secret, but both Mia and Jill talk about how positive the experience was, and how the group of contestants has stayed in touch. One friend — Jenna from New York — had just sent Mia a bunch of recipes for unusually-flavored ice cream (bottom photo).

A special treat, according to Mia, is dining at Flea Street Cafe, where she’s met both owner Jesse Cool and chef Carlos Canada. “I’m working on a variation of an appetizer that I had there a couple of weeks ago when we went for my sister’s birthday,” she says.

Lest we give the impression that Mia’s life is all about food, she is also a competitive swimmer, competing in all four strokes, although freestyle is her favorite. One of her biggest thrills was meeting Olympic swimmer Dana Volmer, which she describes on her Facebook page, Mia Junior Chef. 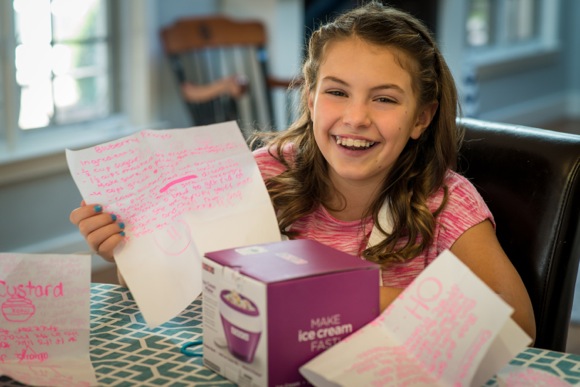 At the young age of 11, Mia already has set her sights on attending Stanford with the idea of one day becoming a neurosurgeon.”The brain is so cool,” she says. “It controls your whole body.

“After I become a successful neurosurgeon, then I want to open a restaurant!”