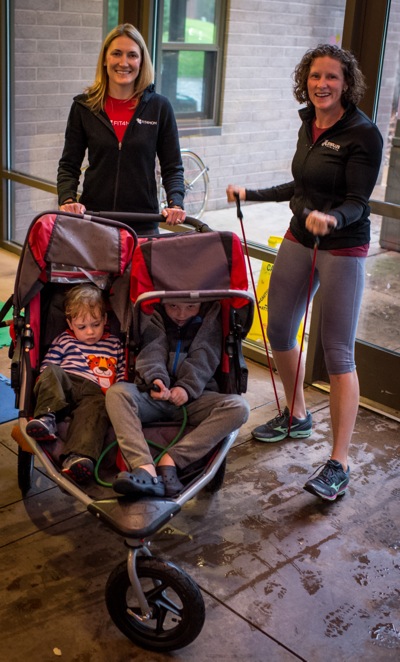 Sara Mooser (right in photo) and Michele Lewis got the idea of applying to open a Fit4Mom franchise on the mid-Peninsula about the same time. Four years ago, the two joined forces as partners. They’ll be bringing the mom-tailored fitness programs to Menlo Park later this month with a grand opening, family fun day at Menlo Swim and Sport in Burgess Park on January 30th.

“It wouldn’t have been as much fun if we’d done it separately,” said Michele.

Sara explained that their Stroller Strides class targets moms who have kids young enough to be in a stroller. “We are outside with the kids, running through a park, then staying in one place for six minutes for a specific exercise. We sing songs and read books, too.”

Another program is Body Back, which is an eight-week, result-oriented program that incorporates both exercise and diet. They’re giving this class at Menlo Pilates and Yoga and Holbrook Palmer Park. 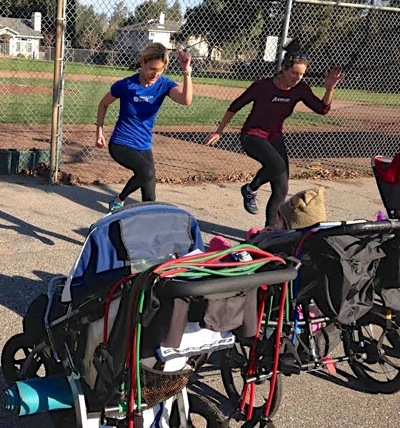 Growing up, Michele was encouraged by her mother to be a “Jill” of all trades, and she competed in swimming, tennis, softball, track, ice skating, soccer, and volleyball to name a few. She competed in the Junior Olympics in Synchronized Swimming and played Varsity Tennis.

Both love the way their business dovetails well with their roles as wives and mothers. “This feels like we are making a difference in people’s lives,” said Michele. “It’s not just the work out. It’s about the community and the connections.”

Information about all of their offerings can be found online at Fit4Mom Midpeninsula.

Top photo by Irene Searles (Note: On the day we took the photo it was pouring outside so we ducked inside.) Second photo courtesy of Fit4Mom