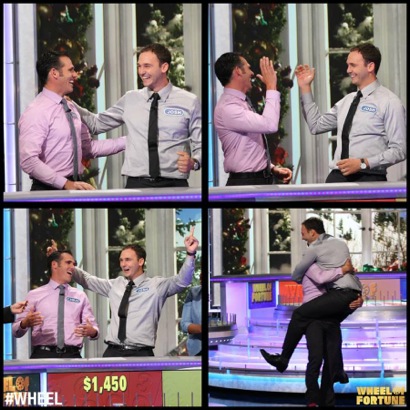 Chris Rubin, a Menlo-Atherton High School teacher and alum, and his brother and fellow M-A grad, Josh Rubin, who teaches a Woodside High School, were contestants on Wheel of Fortune last month.

Upon request from his brother, Chris (left in photos) filled out an online application for the show. He explained: “It was totally random. He [Josh] probably saw it on TV, online, or something, so we just filled out the application. It was just name, phone number, email, and one reason why you would be fun to have on the show.”

A few weeks later in April, they received a phone call from the show and headed up to San Francisco for the audition. Chris recalled: “There was a room full of around 400 people all auditioning for the show.”

During the audition, they first had to “stand up and call out a letter,” replicating what the contestants must do on the show. They were then handed a written test with similar questions to those on the show. However, Chris added, “I’m pretty sure I failed [the test]; I never watch the show and I didn’t know the strategies.”

After this, around 200 people were dismissed. Those remaining introduced themselves to the “audience” and then spun the wheel. After about 30 minutes the judges returned and dismissed about 75 more people. The judges then explained that if the remaining contestants didn’t hear back from them in two weeks, they probably were not going to be on the show.

After two weeks, neither Josh nor Chris had heard anything, so they figured “whatever.” However, five months later in October, they received a call asking if they were available to come down to Los Angeles and film the show.

Chris remembered: “We got picked up from our hotel in L.A. at six in the morning and went to the Jeopardy set for training. We went through three hours of training and then met Vanna White. She was super chill.”

Recounting the experience, Chris mentioned how he “was a little nervous to meet [Pat Sajak] because I figured he was super old and… had a bunch of plastic surgery, but everyone was so nice. [White] came out onto the set in jeans and a sweatshirt with her Starbucks coffee in the morning and was giving us all a pep talk.”

Regarding the atmosphere on set, Chris added, “It’s weird to say that I was really nervous. I think it might be because I’m a little bit competitive, and also because I didn’t want to make a total fool out of myself on national television. But it was really exciting and such a fun experience.”

The brothers had an agreement that “Josh had to spin [the wheel] the whole time, and [Chris] would call out the letters.” This allowed them both to share credit for their wins.

Chris and Josh ended up winning a little over $32,000 in cash and a vacation for themselves and their wives in Puerto Rico. However, Chris’s favorite part was “getting to go down [to L.A.] and spending time with my brother. It was kind of perfect how it all worked out.”

This article, which originally appeared in M-A Bear News, was co-written by Lexi Lobdell. Used with permission.