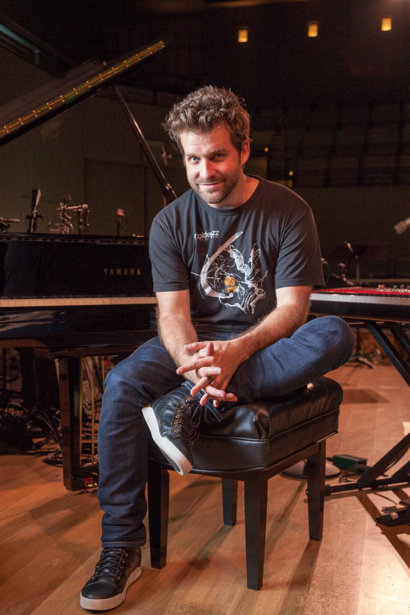 Jazz pianist and composer Taylor Eigsti logs about 170,000 miles a year traveling from gig to gig, spending a good 75% of the time in hotel rooms. But once upon a time he made Menlo Park his full-time home.

“For the first 17 years I lived in one place on Orange Avenue in Menlo Park,”  he recalled sitting in the green room of the SFJAZZ Center where he was appearing with Eric Harland Voyager. “I went to Trinity School and then Woodside Priory. I was doing gigs out of town, but Menlo Park was the only reality that I knew.”

Described as a child prodigy, Taylor took up piano at age four, following his older sister’s death from cancer. At age 12, he played with Dave Brubeck. He was teaching at the Stanford Jazz Workshop by the time he was 17.

Even for a child and teen with tremendous talent, growing up in Menlo was not without its rough spots. In addition to his sister, he lost his father at age 12. “I have a lot of memories around that time,” he says. “My mind has a way of latching on to moments.

“One of my last memories of my Dad was him taking me to see Dave Brubeck. My parents played a lot of good music when I was growing up.

“Even though it was just up the road, San Francisco just seems like another big city to me. Menlo Park will always be home. It’s here that I have friends whom I’ve known for years.”

Taylor talked to us about a neurological condition he has called synesthesia, which he’s come to better understand only in the last few years. In particular, he has chromesthesia, a common form of synesthesia in which sounds are associated with colors. For him, colors are triggered when musical notes and/or keys are being played.

“I’m pretty obsessed with colors,” he said. “When I’m writing music, I print out staff paper in different colors. Maybe the D Minor is bright blue. I hand write all my charts using multiple colors.”

In 2006, Taylor received two Grammy Awards nominations for Best Jazz Solo and Best Instrumental Composition after releasing Lucky to Be Me (Concord Jazz). He tours not only with his own group but frequently with Eric Harland Voyager as well as Gretchen Parlato. He’ll be in Oakland Feb. 12 at Piedmont Piano where he’ll be appearing solo and recording a live album. Then he’ll be back home in June, playing at Filoli with his quartet and Gretchen.

With the Super Bowl on tap the same weekend Taylor was performing at the SFJAZZ Center, our talk turned to his other obsession — football. “I’m a huge fan of both Joe Montana and Steve Young and have met them both,” he said. “And Ronnie Lott, too. It’s all about the Niners — red and gold until I’m dead and cold.

“If I wasn’t a musician, I would have been a football coach. If something happens to my hands, that’s what I’m going to do — turn to coaching.”

Photo by Scott R. Kline, taken at the SFJAZZ Center after a pre-performance sound check, © 2015

You’re extremely good and there are so few in your league. Please make a DVD soon!