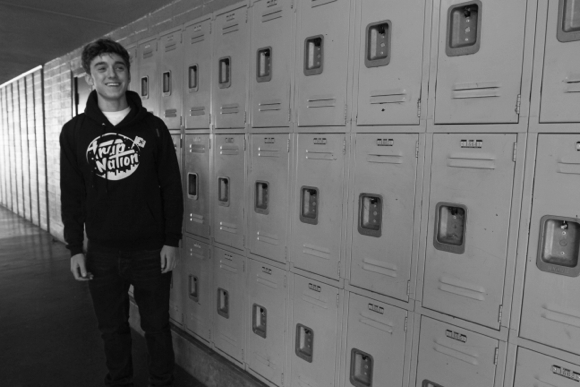 Rather than merely enjoying music in his spare time, Menlo-Atherton High School senior Andre Benz has chosen to pursue his passion, leading him to create a now-trending YouTube channel. In 2012, his channel, Trap Nation, made its debut, and has since accrued nearly 800,000 subscribers.

“In middle school, I was pretty antisocial, so I played a lot of video games,” Benz recalls. “But I started getting involved with some online communities for electronic music and I was like, ‘this is amazing!’”

However, Benz’s love of electronic music began to transcend the boundaries of controlled online chat rooms.  Through his jump to YouTube, Benz has rapidly increased his online presence and helped to popularize his favorite style of music.

Trap music is typically categorized as intense electronic dance music (EDM) with its origins in 1990s hip-hop and rap. Oftentimes, trap tracks will include harsh lyrics and layered synthesizers. Through Trap Nation, Benz attempts to widen the audience of trap music by making new tracks accessible, for free, to a limitless audience.

“The best way to try to explain it is that it’s like a radio station,” Benz says. “I’m basically a channel that helps underground artists promote their music. I don’t make the music; I ask permission to take other people’s music, put graphics behind it, make it all nice, and then I put it on YouTube. People just really like it.”

And like it they do. Trap Nation was the first of several channels that Benz promulgated; Chill Nation, Rap Nation, and Music Nation are all branches of his main channel. In short, Benz’s success on YouTube has been tremendous, and is still on the rise; he can hardly believe it himself. “Oh my God,” he comments, “[I attribute my success to] every artist on the channel… I started when [the genre of] Trap was really young, so that was a great time to get into it.”

After a meteoric rise at such a young age, Benz finds it difficult to look towards the future. “I was originally planning to go to community college for two years, then transfer into an economics and finance program,” he explains, but things have since changed. “Right now, I want to move to the UK with my co-worker and rent an apartment there right after high school to start our thing there.” Seeing as the origins of trap music are distinctly American, the UK seems the next logical step to a worldwide takeover of trap music.

Benz’s year had a bit of a rough start. He and his family moved from New Jersey to California in 2014, and Benz, as well as his younger sister, subsequently started school at M-A.

“When I moved to M-A, I was pretty sad, because I didn’t really have any friends, you know? So I started focusing a lot on my channel, and it started to blow up a lot. So that’s that,” Benz recalls. He adds with a chuckle, “I basically spend all day in front of the computer.” When not behind a computer screen, Benz enjoys running, soccer, and trips to the beach with friends.

This article originally appeared in The Mark, a publication of Menlo-Atherton High School; used with permission.