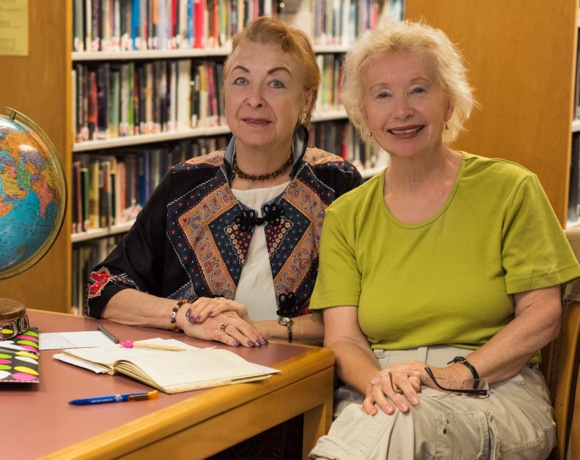 To mark its 30th anniversary, Project Read Menlo Park is hosting a celebratory brunch on Sunday, September 20, 2015 from 11:00 am to 1:00 pm at the Arrillaga Family Recreation Center (700 Alma Street) in Menlo Park. Since 1985, the program has reached more than 3,000 adult learners and 2,000 volunteer tutors.

“One-to-one is still our core offering, but the program has diversified over the years,” said Roberta Roth, Literacy Program Manager. “We now offer English classes at the Belle Haven branch of the library.

“And we also have a conversation club that started a year ago. Initially, it met once a week in the evenings but a morning conversation club was added. People speak many languages, and the goal is to converse in English.

“Finally, in our computer lab, volunteers provide coaching to mostly learners but some tutors, too. People are guided to programs and websites that focus on increasing their reading skills. Almost all of our learners have smart phones and tablets, so the computer coaches work with them on how to get the most out of their devices.

“We are always in need of both one-to-one tutors and computer coaches.”

A new anthology of learner writings, entitled Pearls of Wisdom: A Life of Learning, will be unveiled at the event, which will be emceed by Alisa Clancy, KCSM Jazz 91.1 FM Program Director and “A Morning Cup of Jazz” weekday host.

The guest speaker is Gerardo Pacheco Matus, a former ESL student, current Project Read teacher, and published writer. A Mayan native, Gerardo has an M.F.A. in Creative Writing from San Francisco State University. A recipient of the 2015 Bread Loaf Writer’s Conference, his first poetry book, This Is Crow Land, was published this year.

Brunch will be provided by Menlo Park’s Cafe Zoë, and learners will be contributing breads that reflect their cultures. Live music will be provided by the Bennett Roth-Newell Trio. To reserve a spot for brunch, RSVP by September 8th at (650) 330-2525 or to projectread@menlopark.org.