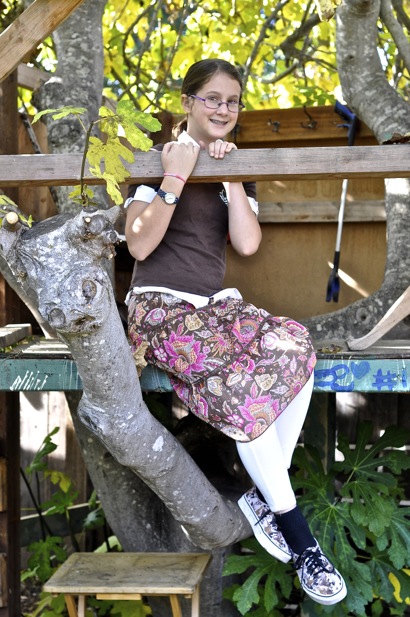 Beatrice Mazzon, who attends Hillview Middle School in Menlo Park, got interested in writing, she says, because she loves reading. Two summers ago, she was hanging out with her cousin Elena Pursell, who was visiting from Pennsylvania, and they got an idea for a book.

The result is 8th Grade Adventure (The Generations, Book One) now available on Amazon, which the cousins worked on together via FaceTime. Written for kids age nine through 12, it tells the story of a foursome from Pennsylvania who take a trip to California where they encounter and have to deal with two bullies.

“After it was done, I went through it multiple times making corrections, and my Mom read it, too,” she says. “Now we’re working on the second book in the series.”

Beatrice admits to being a “huge Harry Potter fan,” who started reading that series the summer between first and second grade. “I’ve seen most of the movies, although not the most recent ones.” (Her father, artist Massimo Mazzon, explains that’s because they are rated PG-13, and Beatrice will celebrate her 12th birthday on Christmas Day.)

The sixth grader doesn’t spend all her free time with her nose in a book or fingers on a keyboard. She hangs out in the tree house in her backyard and takes Kuk Sool Won at the Rec Center. And not surprisingly, given her active imagination and penchant for telling stories, she is interested in drama, taking it as an elective at Hillview and participating during the summer in a program at Peninsula School.

But at the top of her mind now is getting the word out about her book. “I’m telling all of my friends and hoping to get asked to be interviewed on the Hillview TV show!” she says.