Author Barry Eisler’s 11th book, The God’s Eye View, was published yesterday, and he was at his hometown bookstore, Kepler’s, last night to talk about it, read a passage, and answer questions.

Barry remarked that his first Kepler’s appearance was 14 years ago. About the current novel, he said that all the spy technology talked about in the book is based on facts, and the source material is listed at the back of the book 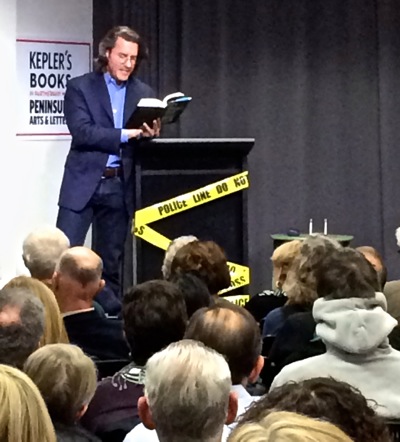 “My first intention is for the book to be entertaining,” he said. “But I’m hoping that when readers come to the end, their reaction is ‘Oh my God, it’s all real.'”

In the Q&A period, he was asked if the National Security Agency (NSA) has protected us, to which he replied: “Almost certainly.  But there is no evidence that bulk intelligence has ever foiled a terrorist plot. What has foiled attacks is old-fashioned police work.”

The author had praise for Edward Snowden, the controversial figure whose disclosure of classified information revealed numerous global surveillance programs. “I wish there were more government employees who had the convictions he had,” Barry said. “It was a huge service to democracy.

“The oath he took was to protect and defend the constitution. He also signed an NDA, a document well-known here in Silicon Valley, concerning secrecy. The propagandists want you to believe that it’s one and the same, but that there is some kind of oath of secracy is a lie.”

Barry continues to hope that actor Keanu Reeves will one day play John Rain [a character in a series of his books] in a television series, and he amused the Kepler’s audience with impressions of the actor, recalling both a telephone conversation with the actor as well as meeting him in Hollywood.

More about how The God’s Eye View, which is available at Kepler’s, came to be written is contained in our interview with Barry prior to his appearance.