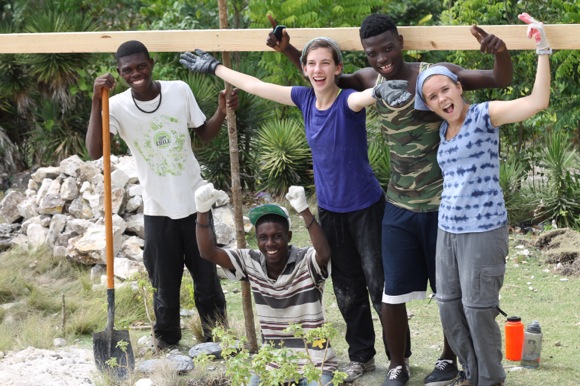 Editor’s note: This summer, the Menlo-Atherton High School buildOn Chapter is traveling to a village in Malawi (Africa) to construct a school. Today (2/16), it is holding a fundraiser at Amici’s on Santa Cruz Avenue. Let Amici’s know you are there to support buildOn, and they will generously donate 25% of your bill to the cause. If you aren’t able to make it on Tuesday, you can make a donation at the group’s fundraising page.

Below, Junior Megan McDonnell reflects on her experience with buildOn on its trip to Haiti last year.

One of my earliest memories is of my nanny reading me a book. As she was reading, I leaned over to look at the page, searching for the story that was magically unfolding, only to be left perplexed and overwhelmed by the swarm and jumble of letters on the page. I remember a “w” and perhaps a “t”, but how those letters came together to make words, and then those words to make sentences, and then those sentences to make a story, alluded me.

I felt lost and a bit scared. That is the one time in my life I remember feeling the true confinement of illiteracy; 900 million people feel it every day.

[Here in Silicon Valley], I grew up in a bubble, believing that an extensive education was not a blessing but a norm. We are so lucky in our area to have access to education; many people don’t. What I consider normal for my life is in fact how only an extremely small percentage of the world lives. I didn’t realize the rarity of my situation — my normal — until over two years ago when I joined the organization buildOn in my freshman year at Menlo-Atherton High School.

buildOn is a global organization that works with high school students, encouraging them to become involved not only in their local community, but also the global community. Our mission is to break the cycle of illiteracy, poverty, and low expectations through service.

As a chapter, we raise $30,000 throughout the year to fund the construction of the school in one of the seven countries in which buildOn works: Burkina Faso, Haiti, Mali, Malawi, Nepal, Nicaragua, and Senegal. Then, over the summer, we travel to the village and work alongside the villagers to help build the foundation of the school. We live with village families in their homes, experiencing a different culture, language, and way of living firsthand.

This past summer, the members of our Menlo-Atherton buildOn Chapter traveled to Haiti with a group of students from Tennessee. The village where we helped build a school is called Lorman, located at the southern tip of Haiti near Les Cayes. It is situated high up on one of Haiti’s many hills, providing a spectacular view of the Haitian coast.

Our team of 23 people stayed in Lorman for about six days. On the worksite, we shoveled, axed, and sweat alongside the villagers: little girls, only four or five, carrying rocks, 20-year old guys pick-axing the solid rock ground, and old men passing buckets of cement. Every day, a group of men came and played the drums while we worked. We all danced and laughed while burning under the heat of the Haitian sun, attempting not to get sunburns. 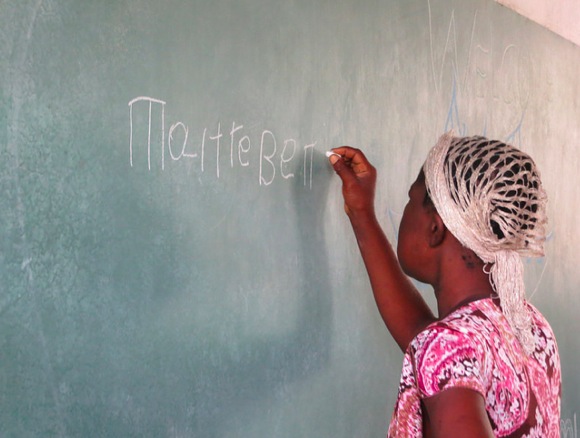 At the end of our trip, we stopped by a completed buildOn school, one that had been funded for and helped built by a different high school team the past summer. We entered a classroom filled with adults from the community. At one point, we asked through our translator if any of the adults from the night literacy program would like to go up to the chalkboard at the front of the room to write their name.

Suddenly, hands flew up. Three women were chosen. And one by one, the three women walked up filled with determination and focus — to write their name. The ferocity of their pride left a deep impression on our group.  Some of the adults told us that they walked two hours to the school after a full day of work in the hot sun. One woman said, “We don’t mind the walk, we just wish we had shirts to wear that said where we are going so that people who pass us know we are going to school.”

Thanks to buildOn, the Lorman village now has a beautiful, completed school. Education and literacy are the keys to a revolution, holding the ability to transform lives and improve the world as a whole.