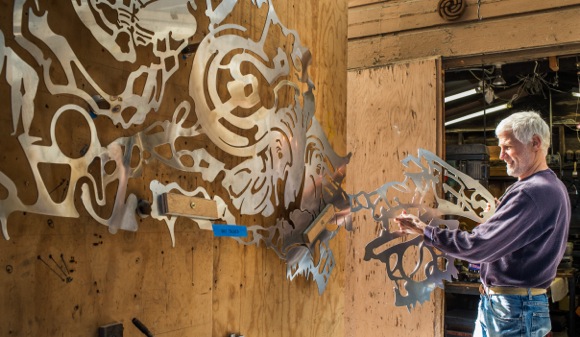 Roger Stoller had one thought when he graduated from the Art Center College of Design in Pasadena with a degree in product design — moving to Silicon Valley.

“I’d read Alvin Toffler’s book The Third Wave and thought to myself, ‘If I’m going to be a product designer, it’s going to be in Silicon Valley,'” he said. 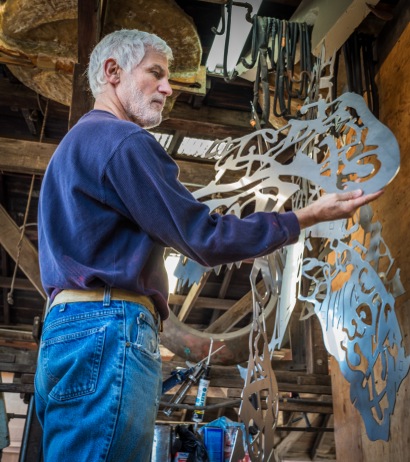 He worked first at Atari and subsequently went out on his own. After 15 years, he had an epiphany of sorts, deciding to become an artist. He sold his share of the firm he’d co-founded to his partners and formed Stoller Studio, Inc. to pursue sculpture full time.

He works out of his Ladera home studio as well as a foundry in San Jose. His studio methods range from bronze casting and stone carving to 3-D computer modeling and water jet cutting. His studio’s production includes public art, fine arts works and art commissions.

“The studio in San Jose is where I build everything,” he said. “I have a few part-time employees and ramp up for large projects. It’s there we cast bronze and do the finishing.”

Roger told us that soon after turning to sculpting full time he heard about Percent for Art. “When development is done in a city, there is sometimes an ordinance that a percentage of the cost of construction goes to funding and installing public art,” he said. “It’s fairly widespread across the country but only in certain cities. Palo Alto has a booming version.”

Today Roger has 11 sculptures displayed around the country and is working on a twelfth. Locally, his work can be viewed at Jack London Square in Oakland, Mitchell Park Library in Palo Alto, Google in Mountain View, and Millennium Park in South San Francisco.

He counts Buckminster Fuller, whose grandchildren he grew up with in Woodside, as one of his chief influencers. While in his 20s, he worked as an assistant to Fuller, who introduced him to sculptor Isamu Noguchi, another influential person in his life.

“Being an industrial designer, you’re the architect of everything that isn’t a building,” he reflected. “Gravitating to fine arts, you build the object around the function. With art, you build the provocative.”

Last experience building “Bucky Models” with you at World Works on Camino Alto in Mill Valley back in 1977 or ’78?

Great to see your own sculptures evolve from that era; Edward O’Hara, Wend Dardarian, Jaime Snyder & Lal to be sure … Kaskafayet rebirthing … How the hell are you?