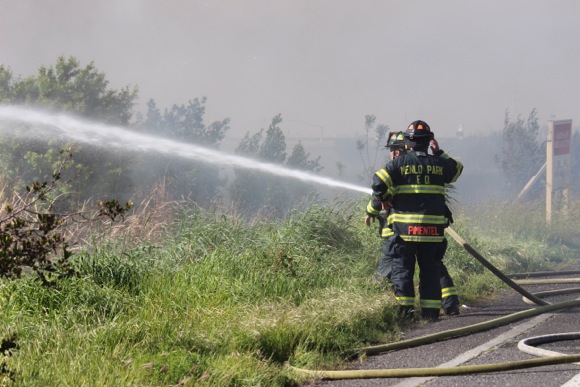 The fast-moving grass and vegetation fire that occurred on Monday, March 28, 2016, in an area known as the Kavanaugh Tract in Menlo Park adjacent to Adams Drive and the Menlo Business Park has been deemed “suspicious” as fire investigators have confirmed it started at a homeless encampment, one of several in the area, by some form of “human action.” Fire Marshal Jon Johnston has been working with the Menlo Park Police Department who now have taken the lead on the case.

Menlo Battalion 1 Commander Ben Marra reported a quarter-acre grass fire on his arrival at 3:37 pm at Monday’s fire and requested a second alarm at 4:03 pm as a storm front with heavy winds estimated at 20 – 25 mph whipped up the fire. It quickly spread across a lush green marshy bog, creating a fast- moving fire front that threatened to jump four-lane University Avenue into a residential neighborhood in East Palo Alto. University Avenue, a main thoroughfare through East Palo Alto that runs between Bayshore Freeway and the Dumbarton Bridge, was shut down for several hours as the fire was brought under control by 6:00 pm and all units were able to clear the scene by just after 7:00 pm.

Brandon Vacarro, a private fire photographer, was allowed to fly his DJI Quadcopter Drone over the fire and shared a real-time aerial video perspective with Chief Marra, who was managing what eventually became a 13-acre fire. The overhead aerial observation gave Marra the strategic situational awareness and view needed to adjust his tactical and operational deployment of firefighting personnel, equipment and apparatus, expediting the fires ultimate extinguishment.

“The 13-minute aerial video is a great representation of the risk and challenges faced by fire crews for what can only be described as an unusual fire at an unlikely time of year,” said Fire Chief Harold Schapelhouman. The video can be viewed online.

The Chief added that the Fire District continues to pursue its own Unmanned Aerial System program and Certificate of Assurance through the Federal Aviation Agency (FAA). The Fire District has partnered with NASA, Exponent Failure Analysis, and DJI on its submittal to the FAA and program development.