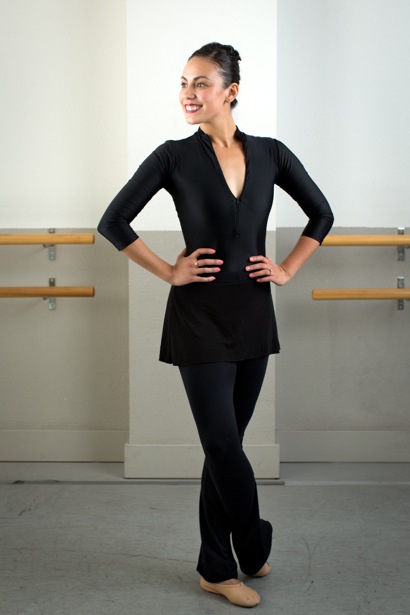 Amy Marie Briones, who recently joined Menlowe Ballet, has been practicing her craft since she was four years old. Her professional career began when she joined the Silicon Valley Ballet in 2006. She’s danced her childhood dream role, Kitri in Don Quixote, as well as leading roles in Jorma Elo’s Glow-Stop, Sir Frederick Ashton’s Les Rendezvous and Balanchine’s Allegro Brillante.

So we were not prepared to hear her confess: “I’m klutzy when I’m just me, falling down stairs and such. I’m only coordinated when I’m dancing!”

Her ballerina persona will be on display in all three ballets that make up Menlowe’s spring season, Collage, which features world premieres by choreographers Val Caniparoli, Gregory Dawson and Michael Lowe.

“I first met Michael when I took lessons from him when I was eight or nine at the Ayako School of Ballet,” she said. “So getting to work with him again is great as is the opportunity to work with Val and Gregory for the first time.”

From an early age, Amy Marie knew her passion was ballet. “I started begging my Mom for lessons when I was two, and she finally relented when I was four. That was at Ayako, where I learned from Ayako Takahashi and where I now teach.” [She also  teaches at Infinity Dance Studio in San Jose and does substitute teaching at Menlo Park Academy of Dance.]

Amy Marie is married to dancer Akira Takahashi, who is also with Menlowe. They will be paired in each of the three world premieres on Menlowe’s spring program.

Between teaching, rehearsing, and performing, ballet consumes most of Amy Marie’s and Akira’s lives. But they do make time for another “b” — baseball. “I love the Giants,” she says. “Growing up in San Mateo, I became a fan and we go to games as often as we can”