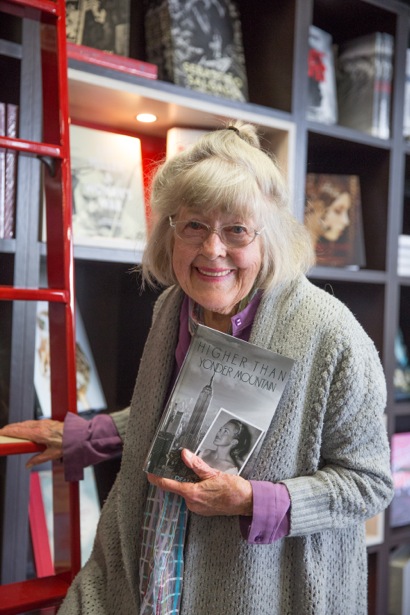 To kids and parents at Laurel Elementary School where she volunteers, Deany Brady is Grandma Brady. When she stops in once a week at Whole Foods Market, where she worked for 20 years, that’s what her former colleagues call her as well.

But on Saturday, April 16 at 2:00 pm, she’ll be called “author Brady” during an appearance at Kepler’s to talk about her second memoir, Higher than Yonder Mountain. It follows An Appalachian Childhood which told the story of her growing up on a small, hardscrabble farm in the mountains of Georgia. The new memoir follows her life in Miami Beach and then New York when she met and married successful New York businessman, Jerry Brady. When his health declines, she draws on her Appalachian roots for courage and determination she needs to meet this challenge.

Deany came west to Menlo Park to live with her daughter, who teaches at Laurel, in 1997. “I came for a visit and ended up staying,” she says. “But it’s been the happiest 20 years.”

She views life as a “series of lessons.” “There were so many down times but the up times were so grand,” she says. “When I was going through it, I didn’t think much about it. Now, in writing my books, I can see the important lessons I learned each time something happened.”

When Deany first moved to California, she took some classes at DeAnza. She credits Ellen Sussman for good writing instruction and Harriet Chessman for being “a wonderful editor.” She’s working on the next memoir which she’s calling An Examined Life.

“I only had a high school education,” she said, “but somehow I could always put sentences together and people would tell me I phrase things well.”

You can find Deany’s latest memoir in the autographed book section at Kepler’s and register online for her appearance at the book store.

I feel blessed to have found her memoir of childhood. ‘A beautiful mind’!
My wife and I’ve visited Elijay. I could settle into that area like a second home.