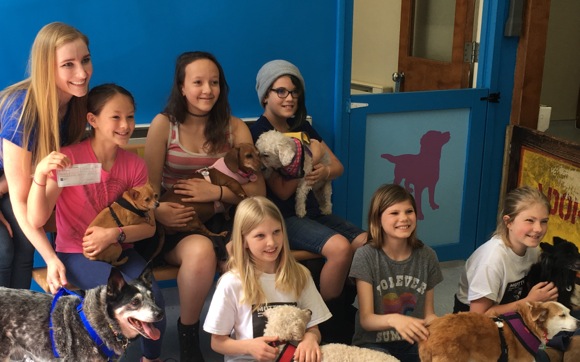 On April 20, six Scouts visited Muttville senior dog rescue in San Francisco to deliver a $1,000 donation and visit the senior dogs in its care. They raised the money by hosting a movie night in March at Lou Henry Hoover House in Rinconada Park showing Star Wars Episode IV.

They charged admission, and as one Scout described: “Two girls sold dog treats and dog toys that we made, and two other girls sold ‘human treats’ [popcorn and candy]. And we got to educate 50 people about Muttville and senior dogs through our presentation. And those people will probably educate their families, and it will spread.”

The Girl Scouts are spreading the word about the benefits of adopting or fostering an older dog: “Senior dogs are good because they’re usually [house] trained…and usually slower so they won’t pull on walks.” 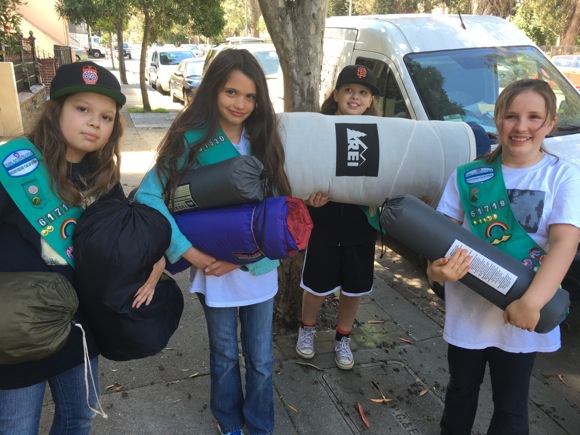 On April 21, four Scouts visited a small non-profit in San Francisco, the Homeless Youth Alliance, delivering items collected from a tent and tarp drive and money raised [$2,221] from a ‘Trails for Tents’ hike-a-thon.

The Scouts put a bin at their school to collect donations. “And we sent emails to our neighborhood list,” explained one Scout. “We got over 30 items including sleeping bags, tents, sleeping pads, tarps, raincoats, a backpack, and socks.”

Said another Scout: “After that, we did a fundraiser that was a hike-a-thon. Four of us went to a park and got other people from our school to sign up and get sponsors, so they could raise money for what we were doing. It was very cool.”

Over 30 children and adults hiked at Stulsaft Park in Redwood City in March.

Development Director Suzanne Rivecca said she wanted to give the girls an idea of what will be done with the funds they raised – hot meals, socks, or ID cards to help with getting a job are just a few of their many valuable services. “Or the money could provide 11 days of street outreach.” she added.

Troop members attend Peninsula School and are in 4th, 5th and 6th grades.

What a wonderful group of girls, so caring & compassionate