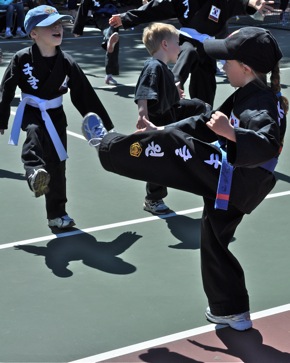 “Over the years, this has become a family favorite event,” says Kristin Quintana, owner and chief instructor at Kuk Sool Won. “Our students to learn that they can make a difference in the community, and everyone really enjoys the challenge of the kick-a-thon.”

The Kuk Sool Won™ students form several lines to each do over 1000 kicks to support MACDA, the Martial Arts Character Development Alliance. The event will start at 10:00 am at the field at Burgess Park that is next to the playground off of Burgess Drive in Menlo Park. A mini-Carnival with food, games, bounce house, and more, will follow from 11:00 am to 1:30 pm.

The Kick-A-Thon raised about $5,000 in its first year and, thanks to generous families and friends, has raised over $75,000 over the last several years.