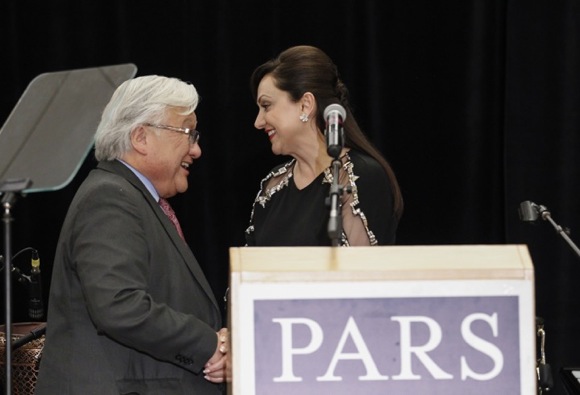 We first talked with philanthropist and Atherton resident Bita Daryabari when she opened the Alameda de las Pulgas office of the Pars Equality Center in Menlo Park. PEC is the only non-profit organization that provides comprehensive social, legal and community services to the Iranian-American community.

Since then, she’s opened additional offices in San Jose as well as Los Angeles and Orange counties. “We have a community-based philosophy and focus on the most vulnerable people,” she said. “We offer newcomers, and the American born, educational support, women’s health, job and computer training, legal counsel, and even housing so they can assimilate within American society and build their life with dignity.”

PEC recently held its 6th anniversary fundraising gala where special guest Congressman Mike Honda praised Bita’s work. “There is no doubt that we need this Center more than ever,” he said.  “It advocates for more positive perceptions of Iranians in the U.S. media, while offering services and programs that help establish, integrate, and support Iranian Americans so that they are able to function productively in American society.”

Bita is also gifting a $5 million endowment to the University of California, Berkeley, to further the study of Iranian languages, literature, history, arts and culture. She hopes the gift will help students who are part of the Iranian diaspora to learn more about their heritage, and she believes that non-Iranian students can benefit as well.

“Learning the culture and history of another country can open hearts and minds to new understanding, respect and peaceful solutions to problems,” she said.

The UC Berkeley gift is one of a series of endowments by Bita, including UC Davis ($1.5 million), Stanford University ($6.5 million) and the University of Cambridge, England ($2 million), to support continuing research on the Shahnama, or The Book of Kings, the emblematic text of Persian historical culture.

Additional efforts by her to further higher education include contributions to the UC San Francisco Mission Bay ($1.5 million) for neuroscience research and the Bita Daryabari Scholarship Program For Women of Middle East in Business and Law at Golden Gate University ($1 million).

Thank you for setting a marvelous example by your continuing philanthropy. Congratulations on getting the recognition you deserve.

p.s. When we lived in San Jose many years ago and before Mike Honda became the Hon. Mike Honda he was in our circle of friends. Give him my regards the next time you see him. Thanks.

Peace be upon you
You’re proud of us Iranians. Good luck to you. Be healthy and viable.

I continue to be impressed by your amazing contributions! Also congrats on the honorary doctorate from Golden Gate University! I had suggested they give you one years ago (under different leadership), but back then, they said they were not going to award any honorary doctorates (to anyone).