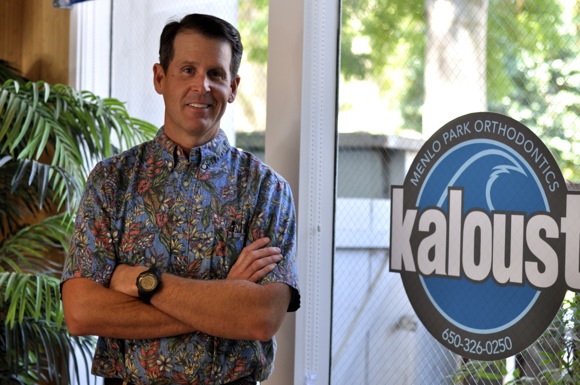 “Getting from point A to point B” has been a major part of Dr. Scott Kaloust’s life ever since he first learned to swim from one end of the pool to the other. Now, decades after he first jumped into the water, he still applies that principle — both to his swimming endeavors as well as to his Menlo Park-based orthodontic practice.

On July 22, he will attempt to swim across Lake Tahoe, a 21-mile journey. “I was going to do the swim in 2013,” Scott explains, “but there was the fire in Yosemite so it was too smoky. I wouldn’t be able to see.”

Despite the minor setback, Scott continued his open water, long-distance swimming and swam across the approximately 20-mile Catalina Channel in 2014. Though he has been swimming since he was young boy, he only started doing open water, long-distance swims a few years ago when a teammate on the Menlo Masters swim team introduced him to it. “I started with one-to-two-mile swims. I wanted to do something local,” he says.

For this summer’s swim, Scott decided to swim across Lake Tahoe because he loves the lake and skis in the area during the winter. However, he realizes that the “combination of the long distance, the high elevation, and the cold water temperature” will make it particularly challenging.

He expects the swim to take him about 12 hours, but the time may vary depending on conditions. Though swimmers will stop for food and water, they are not allowed to get on a boat or use a wetsuit because that technology was not available in the past and would make it hard for people to compare times. In total, Scott thinks that only about 150 people have successfully completed the route he will swim.

As preparation, he is raising money through water.org to provide clean water to those who don’t have any, and then matching those donations with equal donations to local schools as a “roundabout school fundraiser.”

When asked why he enjoys swimming, he replied: “I like having a goal of some sort … having to think about it way in advance and plan on how to get to that goal. I like the physical challenge. And I like water.”

In terms of his orthodontic practice, he enjoys it for a similar reason: “I’ve been in Menlo Park since 2000. It’s fun because you’re watching families grow up and get from point A to point B, like going off to college. It’s about making a difference in someone’s life.”

And whether he is raising money for his swim, or straightening teeth, Kaloust is definitely making a difference in the lives of many.