Olympian KK Clark visits her alma mater, Sacred Heart Prep, in Atherton with a gold medal around her neck 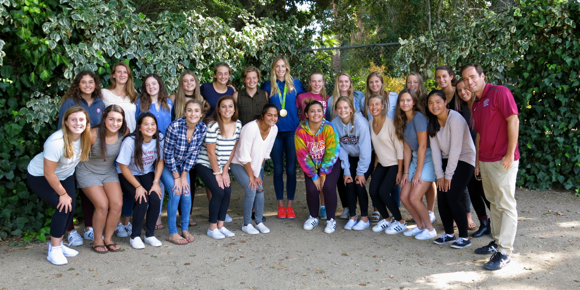 The Sacred Heart Schools, Atherton, community celebrated the return to campus of its first Olympic gold medalist on Tuesday. A large crowd of current and former students, parents, faculty, and staff joined KK Clark — a 2008 Sacred Heart Prep grad and member of the  Olympic champion US women’s water polo team — for a special poolside conversation at the Dunlevie Aquatic Center. 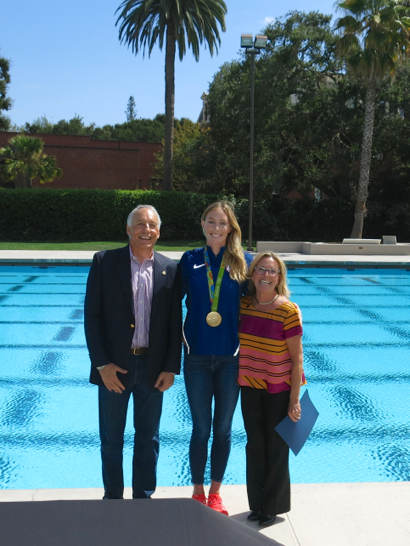 SHP girls’ water polo head coach Jon Burke introduced Clark by noting that more Americans have gone to space than have played for the water polo national team. After Burke listed Clark’s numerous achievements as a high school, college, and international competitor, KK took center stage with her gold medal draped around her neck. She received a certificate of recognition from the Atherton Mayor Elizabeth Lewis and Vice-Mayor Michael Lempres (pictured right) before taking the mic to tell her story.

Despite the recent triumph in Rio, Clark told a much more complicated story of persistent doubt mixed in with her many successes. She admitted to having an intense fear of failure and to crying after her first water polo practice after realizing she couldn’t touch the bottom of the pool. Having followed her older sisters into the sport, she said that she wanted to quit early on but that her parents simply would not let her.

“At that point I figured all of my friends were on the team, so I might as well stick with it,” she said. She ultimately made the decision to truly commit herself to water polo by joining the SHP swim team in her sophomore year. “I realized that you have to swim if you want to be good at water polo,” she recalled. 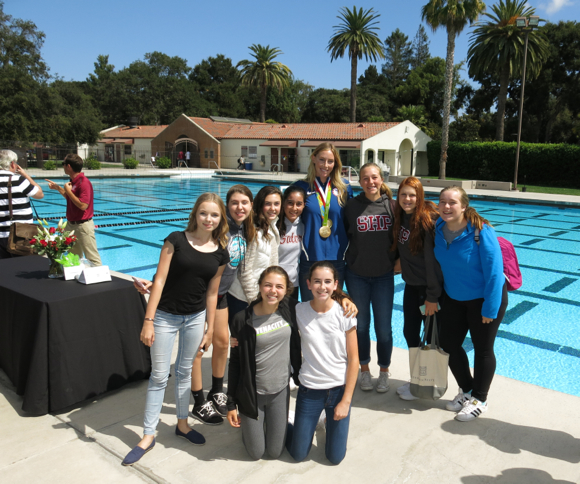 After a stellar career at SHP that included the school’s first girls’ water polo CCS championship win, Clark moved on to UCLA, where she was a member of the national championship Bruins team in her freshman year. She remembered her mother coming down to the railing after the NCAA title game and asking, “What now?”

This was a question that she struggled to answer as the valley of the everyday grind of training followed the peak of NCAA triumph. She again considered quitting water polo but, with the help of a sports psychologist, she regained her passion for the sport and continued a standout career for UCLA. Although the Bruins fell short of another national championship, Clark recalled that it was after the NCAA third place game in her senior year that multiple opposing coaches approached her to say that she had a serious shot to make the senior national team.

She again faced a crisis of confidence, and this time, she fell back on her Sacred Heart roots. “I decided to make a syllabus for myself, just like you always had in high school,” she said. This agenda included daily journaling of her training goals and a reacquaintance with meditation, for which she credited SHP religious studies teacher Rod Cardamone. “I ended up making the Olympic team because I decided to start having fun again, she said.”

After a water polo career of impressive accomplishments accompanied by constant self-doubt, Clark was sure of one thing. “As soon as I got that call that I had made the team, I knew that was the gold medal,” she said.

The US team took care of business in Rio without any sign of feeling the pressure of their status as heavy favorites. KK credited another piece of wisdom, this time from head coach Adam Krikorian, for allowing the team to play so freely. “He said, ‘Imagine what you want this to look like at the end, and work backwards.’ And I imagined celebrating with my teammates in the pool,” she said. “And that’s exactly what happened.”

Author of this post, Doyle Pitchford, is a Sacred Heart Prep alum and current faculty member.