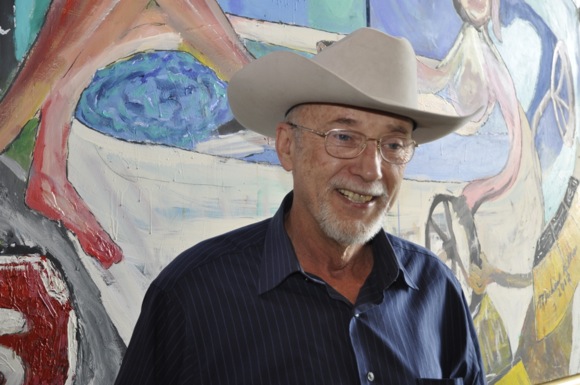 On Wednesday, November 9, at 4:30 pm there will be an Art & Wine Tour at the Atherton Town Hall featuring artist Michael Killen. This local artist knows how to raise the level of discussion of important developments and issues of our time.

SRI International, a Menlo Park research company, influenced Michael to move to Silicon Valley from Massachusetts as a young man. Before he became an artist he was accomplishmented in corporate education, market research, media and publishing. He founded and ran Killen & Associates, Inc., for over 30 years.

Paula Kirkeby of Smith-Andersen Editions Gallery said “Michael Killen is big. He makes art for the art viewing public.” Cole Wilbur, founding president and Trustee of the Packard Foundation, said, “Michael’s art is important. It pulls you in and you are changed.”

Michael’s most recent painting is Climate, Ocean and Energy Recommendations for the New President (6 x 15 ft.) Other paintings include Sustainability and Resilience of America (both 5 x 24 ft.). Presently the Governor’s Office of Planning and Research is displaying three prints of his work. In 2017, for the sixth year in row, the Silicon Valley Energy Summit at Stanford will feature Michael’s paintings.