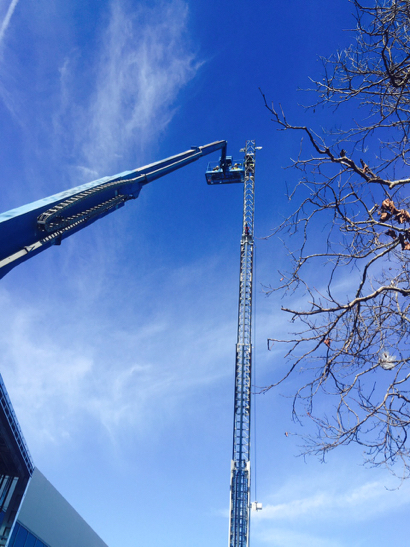 Two workers were safely rescued from lift basket some 80 feet in the air yesterday by Menlo Park Firefighters.

In the early afternoon, Engine 2 was dispatched to 1315 OBrien Drive in Menlo Park on a report of two men trapped on an elevated platform that had malfunctioned. When they arrived, they could see two men in a lift basket that was some 70 to 80 feet in the air, well above the reach of the fire engines 24-foot ladder.

Captain Rich Villa, in charge of Engine 2, requested that Menlo Truck 1 respond. The 100 foot aerial ladder truck is specifically equipped for high-angle rescues, and all of its personnel are familiar with high and low angle rescue techniques.

When Truck 1 arrived, Captain Chris Pimentel quickly ascertained from the construction site foreman, who was with Tricore Panels, that two of his workers in the basket had been stuck in the elevated position for over 2 1/2 hours.

The two men had been working on a two-story structure when the hydraulic system malfunctioned, not allowing them to lower the basket. In an attempt to reset the system, they raised the basket up to over 70 feet, but it still would not lower. A mechanic at the scene attempted to fix the lift, but was unsuccessful, so firefighters were eventually called.

Truck 1 was strategically positioned for a mid-air pick off, and both men were soon safely and happily back on the ground again. Battalion Chief Ben Marra said “while these types of rescues are rare, the value of an aerial ladder truck isn’t just for structure fires.

“[In August], we used a different technique to lift an injured worker out of a large basement under construction. High or low, the versatility of the ladder, the equipment on the truck, and the training and experience of the firefighters themselves makes this vehicle invaluable for unique technical rescue situations”.