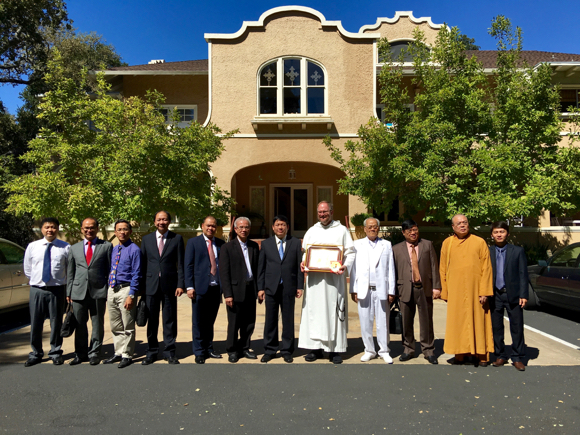 Recently, 13 delegates from the Vietnam Committee for Religious Affairs met with several religious leaders from the Church of Jesus Christ of Latter-day Saints, St. Raymond, and First Baptist Church in Menlo Park.

The delegation, including some members of the Vietnamese government, met with the Menlo Park leaders to discuss a new draft of Vietnam’s religious laws and the benefits of the country’s current policies. They also asked Father Christopher Fadok, a priest at St. Raymond, about Catholicism in the U.S. and wanted to learn about St. Raymond’s humanitarian efforts and its relationship with other religious groups. During the meeting, Fr. Christopher gave the delegation a tour of St. Raymond (photo below). 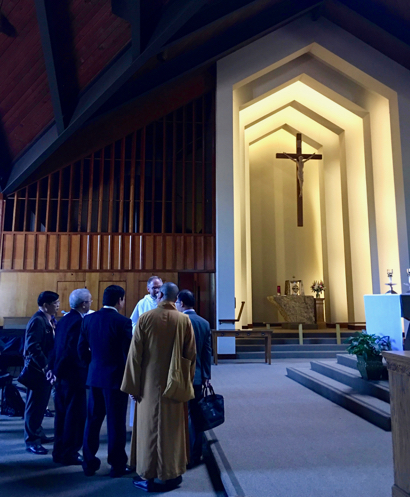 At the Mormon Church, the delegation also expressed interest in learning about the typical Sunday. Dow Wilson, President of the Menlo Park Stake of the Church of Jesus Christ of Latter-day Saints, explained: “We were able to take them through a Sunday School class for adults as well as a Sunday School class for small children. They all had a sparkle in their eyes to see the children learning about God and Jesus together. Clearly, we all share a very common ground in our love of children.” Overall, Wilson describes the delegation as “open, curious, and loving church leaders of their own congregations and religions back home.”

Currently, Vietnam allows freedom of religion, but the government restricts unregistered groups as well as groups that threaten security or unity. Compared to the U.S., Fr. Christopher wrote: “They have more restrictions and government involvement in religion than we are used to in the U.S. But they appreciate the contribution religion can make to a society [and recognize] the humanitarian work we do together and individually.” That aspect of religion was, according to the delegates, a similarity between religion in the U.S. and in Vietnam.

“My impression is that they are concerned to protect their culture and social unity even as they try to provide a measure of religious freedom,” said Fr. Christopher. “They distinguish between native and foreign religions, and they want to be sure that there’s harmony among them and that foreign religions do not endanger their native culture.”

After the meeting, the delegation gave St. Raymond a golden image of the One Pillar Pagoda as a gift. Though they communicated through a translator, Fr. Christopher affirmed that “it was a warm and friendly visit and I’m happy to have been invited to play a part.”

Wilson shared a similar view, adding, “It was a great honor for us to participate with them along with other Christian churches in our community.”