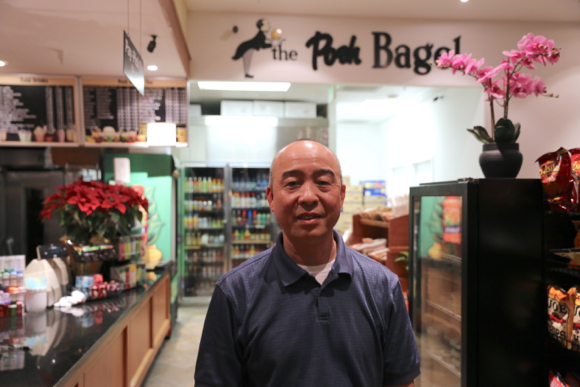 Editor’s note: Here is the second part of a story about a downtown Menlo Park merchant, Anthony On Lao. It was reported and written by Menlo-Atherton High School students Megan McDonnell and Jackson Confer with photos by Erica Miner. The first part can be found here.

Finally, in 1985, Lao and his sister’s family arrived in Los Angeles, California: the United States.

Lao enrolled in high school, where he worked at his education and received good grades. But his family in Cambodia was not concerned with his report card; they needed him to send money to bring them to the United States.

Lao found a job at a donut shop in Santa Ana, and each day after school would take a bus for four hours to and from Los Angeles to Santa Ana, where the donut shop was located.

The master at the donut shop, however, refused to teach Lao how to make donuts, preferring him to complete menial tasks such as mopping the floor and cleaning. Lao, determined to help his family, began watching the master carefully, learning the recipe by observation.

An absence brings an opportunity

Soon an opportunity arrived for Lao to prove himself: The master confused work schedules and did not show up at the shop.

“Then accidentally one day, I showed up but he didn’t show up. It was so busy, and that time the owner said, ‘Anthony do you know how to make donut?’. And I said, ‘I know how to mix, I know how to fry, but I don’t know how to do all the stuff.’ The store was so busy. I went in the back and came out and said to the owner, ‘The dough is ready, sir.’ But the store was so busy, he said just put it down. I thought ‘Wow, it’s so busy, maybe if I keep bothering him he’ll get mad.’ So I tried to do it by myself. I’d [seen] the way to [do it] so I do the same thing. So by the time he almost run out of donuts in the front and he came back, I had done everything.”

After that, the owner began paying Lao full-time. Soon after, the owner recognized Lao’s commute issue, and solved it: He gave Lao his own car to drive to and from the shop. After saving up, Lao returned the owner’s car and bought one of his own.

Eventually, the balancing act of working several hours a week and attending high school became too much.

“I quit school. I feel bad that I quit school. ‘Cause of the money.’ That’s what I told myself, and my children. ‘Don’t [quit], because of money. Go get an education. It’s good for you. Don’t be like me.’ You know, I have all my family, but I don’t have nothing.”

After Lao dropped out of his high school, he began working full-time. Not only did he work at the original donut shop, but he added two more jobs at other donut shops in the area. On Saturday and Sunday, his number grew even higher, working four jobs on the weekends.

Lao prides himself on his work ethic. It was this quickness that gave him the ability to devote so much of his time to making donuts and to save the money to bring the rest of his family over from Cambodia.

“I sent all the money for my family. So finally, they [were] all here.”

By this time, Lao had not seen his parents for five years.

“I missed my mom. And when they come here, they missed me a lot. So I worked hard and gave all the money to my mom.”

Now looking back, Lao is grateful for the family he has, and their proximity.

“Now, that’s all I have. I’m happy. I have a good family. I have good kids. I don’t worry about money much, all I worry about is friends and family. Money, I cannot take with me, I live for family.”

Lao’s story is one of perseverance. After surviving the violence and destruction of his home country, and living in four different refugee camps, he has carved a path for himself and his family in the United States. Menlo Park is lucky to have someone so positive and inspiring at the center of our community.

Lao has gone back to Cambodia multiple times since leaving the country when he was 12. Thankfully, Cambodia is no longer the war-torn country of his childhood.