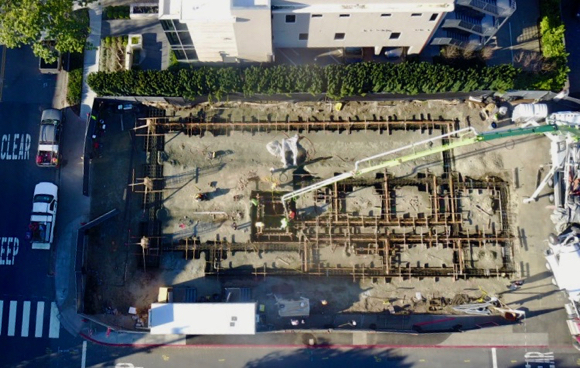 Aerial photos and video taken by a drone on Friday, March 17, show progress on building the new downtown Fire Station on Oak Grove Avenue, scheduled to be completed by the end of the year.

Piloted by Captain Tony Eggimann, the drone provides a unique view of the new station’s concrete footings being poured in place, which will provide an anchor for the building’s walls.

In recent months, Captain Eggimann has flown the District’s drone for Search, Rescue and Recovery missions in the Bay, inspected bridge damage during a rain storm at the San Francisquito Creek and Highway 101, and in Sacramento where the Swift Water Rescue Team was deployed into the Central Valley.

“We now have four different drone platforms and six pilots who can operate them,” said Fire Chief Harold Schapelhouman said.  “We just applied to the FAA for an expanded authorization to fly at night and over crowds. We continue to find new ways to use this incredible technology”.

You can watch the video here.

Lookin’ Good!
Glad you didn’t tear up where my garden used to be!