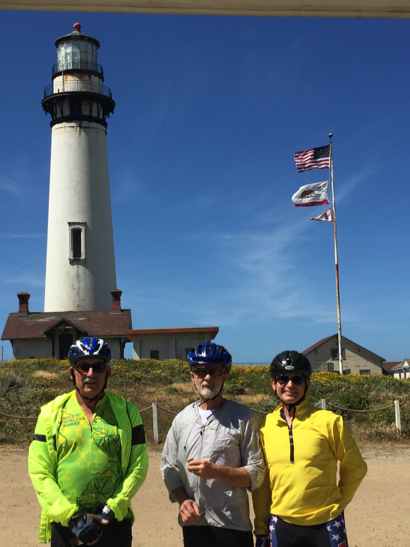 Continuing to mark its 40th anniversary, the Peninsula Open Space Trust (POST) held a “40 for 40” ride coastside today “to celebrate our donors, our accomplishments, and, most importantly, the beauty of the places we protect,” according to spokesperson Marti Tedesco.  “So many in our community are cyclists, we thought it would be great to do an event much like MALT in the North Bay’s ‘Tour de Malt’ and host a big group ride.”

Taking part in the ride were Menlo Park residents Dennis Nugent (far left) and Mike Laine (middle) along with Bart Nelson of Los Altos. “It was an incredibly well-planned event on a great scenic route,” said Dennis. “And we all agreed it was the best food we’ve ever had on a ride — complete with white tablecloths in a barn!” 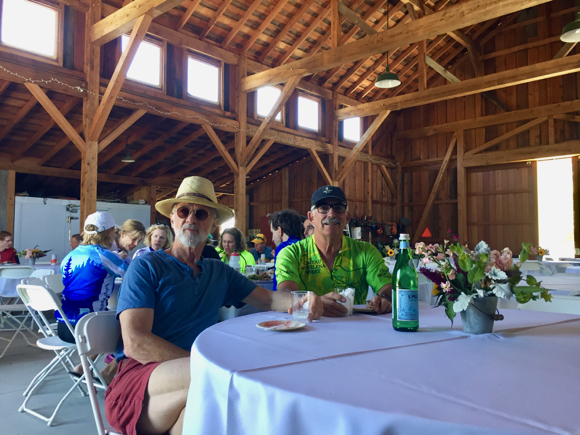 Participants rode through lands that were protected via POST’s $200 million Saving the Endangered Coast Campaign in 2001, such as  Cloverdale Coastal Ranches, Potrero Nuevo Farm and  many properties along Highway 1 including the Pigeon Point Light House. “[These] provide an amazing backdrop to many who not only cycle, but enjoy the 40+ stoplight-free miles along Highway 1 running from Half Moon Bay down to the Santa Cruz county line,” said Marti.

More than 90 riders took part in the 40-mile loop with another 30+ riders doing the shorter 17-mile loop. Along the way, rest stops at key points highlighted specific POST-protected land. Riders enjoyed a post-ride lunch at Root Down Farm, where the ride began and ended. 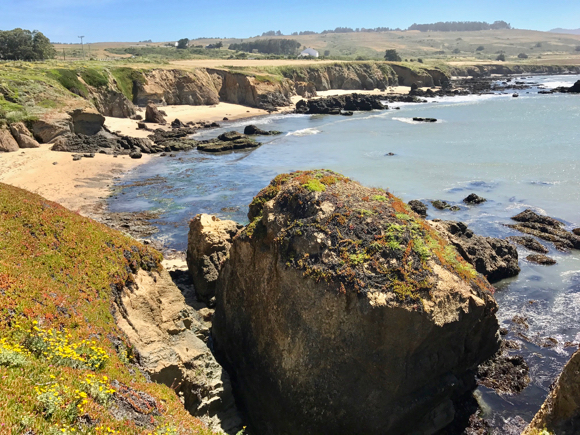 “Root Down Farm is run by Dede Bois, our current tenant who rents the farm from POST,” explained Marti.  “She raises organic chickens, pigs, turkeys and crops on the property. It is also the site of a newly renovated barn. Blue House Farm, another farmer on POST-protected land on the coast, also contributed to the lunch.”