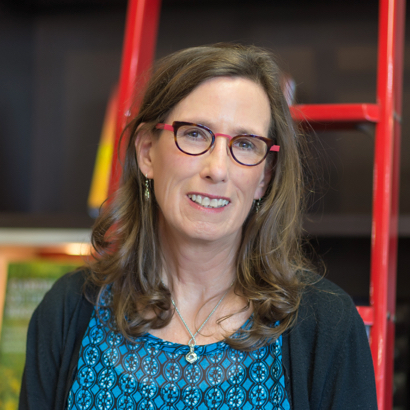 By Jean Forstner’s reckoning, she’s “just a do-gooder at heart.”

KLF was created as part of  Kepler’s 2020 Project, whose goal is to reimagine Kepler’s and create a next-generation organization for producing events and community programs covering a wide range of literary, social, and cultural topics.

Jean was formerly director of programming and operations for Kepler’s event programs. Prior to joining Kepler’s, the Stanford grad was California State Director for U.S. Senator Alan Cranston.

She explained that the standard bookstore event, “talk/read/sell,” is not inspiring. “The format for most of our literary events is a conversation. The goal is to put interesting pairs together so that people can hear a conversation at Kepler’s they wouldn’t hear anywhere else. For example, we paired Kahled Hosseini [author of The Kite Runner] with poet Ellen O’Brian.

“What we know about our community is that they always give us feedback. And they’ve embraced this idea of onstage conversations.”

Jean’s literary tastes focus mainly on non-fiction. “I majored in political science at Stanford and actually worked as a political scientist, and I’m still interested in politics. Given that, I really enjoyed reading Al Franken’s book about his time in the Senate.”

In addition to the literary events, Jean explained that there are other KLF programs. One is producing literary events in local schools, including those in the Ravenswood School District serving East Palo Alto and the Belle Haven neighborhood in Menlo Park. As part of each event, KLF donates books to the school.

Other KLF programs include:
– A syndicated radio program, In Deep with Angie Coiro, featuring conversations on life, art, and politics between  journalist Angie Coiro and newsmakers, writers, and artists;
– Story is the Thing, a series of events featuring emerging writers from the San Francisco Bay Area who read their stories and discuss storytelling and the writing life with the audience;
– Quarterly literary seminars, led by best-selling author and former adjunct professor at Berkeley, Kimberly Ford; and
– Discussion groups covering fiction, nonfiction, big ideas, and novels in Spanish.

“Community support is critical to our mission,” Jean said Forstner. “We invite the community to participate in our programs and support them through volunteering and tax-deductible donations.”