by Danielle Torrrent Tucker on August 5, 2017 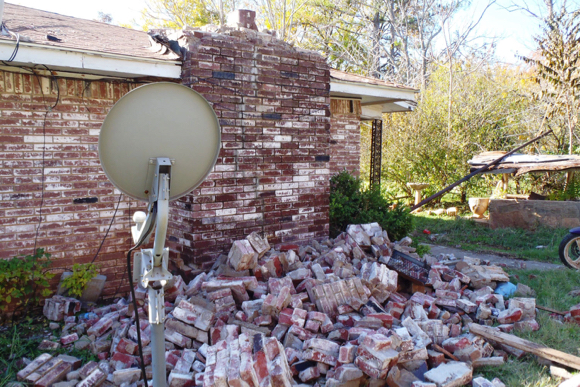 Editor’s note: We depart today from our usual community-focused approach to what’s going on locally, for an interesting read from our neighbor to the south, Stanford. It covers a topic – earthquakes – that’s getting a lot of chatter on the various Nextdoor neighborhood sites in Menlo Park.

Whether an earthquake occurs naturally or as a result of unconventional oil and gas recovery, the destructive power is the same, according to a new study appearing in Science Advances Aug. 2. The research concludes that human-induced and naturally occurring earthquakes in the central U.S. share the same shaking potential and can thus cause similar damage.

The finding contradicts previous observations suggesting that induced earthquakes exhibit weaker shaking than natural ones. The work could help scientists make predictions about future earthquakes and mitigate their potential damage.

“People have been debating the strength of induced earthquakes for decades – our study resolves this question,” said co-author William Ellsworth, a professor in the Geophysics Department at Stanford’s School of Earth, Energy & Environmental Sciences and co-director of the Stanford Center for Induced and Triggered Seismicity (SCITS). “Now we can begin to reduce our uncertainty about how hard induced earthquakes shake the ground, and that should lead to more accurate estimates of the risks these earthquakes pose to society going forward.”

Earthquakes in the central U.S. have increased over the past 10 years due to the expansion of unconventional oil and gas operations that discard wastewater by injecting it into the ground. About 3 million people in Oklahoma and southern Kansas live with an increased risk of experiencing induced earthquakes.

“The stress that is released by the earthquakes is there already – by injecting water, you’re just speeding up the process,” said co-author Gregory Beroza, the Wayne Loel Professor in geophysics at Stanford Earth and co-director of SCITS. “This research sort of simplifies things, and shows that we can use our understanding of all earthquakes for more effective mitigation.”

Oklahoma experienced its largest seismic event in 2016 when three large earthquakes measuring greater than magnitude 5.0 caused significant damage to the area. Since the beginning of 2017, the number of earthquakes magnitude 3.0 and greater has fallen, according to the Oklahoma Geological Survey. That drop is partly due to new regulations to limit wastewater injection that came out of research into induced earthquakes.

To test the destructive power of an earthquake, researchers measured the force driving tectonic plates to slip, known as stress drop – measured by the difference between a fault’s stress before and after an earthquake. The team analyzed seismic data from 39 manmade and natural earthquakes ranging from magnitude 3.3 to 5.8 in the central U.S. and eastern North America. After accounting for factors such as the type of fault slip and earthquake depth, results show the stress drops of induced and natural earthquakes in the central U.S. share the same characteristics.

A second finding of the research shows that most earthquakes in the eastern U.S. and Canada exhibit stronger shaking potential because they occur on what’s known as reverse faults. These types of earthquakes are typically associated with mountain building and tend to exhibit more shaking than those that occur in the central U.S. and California.