Menlo Engine 4 responded last Friday evening (8/18) to calls reporting smoke coming from the roof and eaves of a home in an unincorporated area next to Atherton.  In total, 5 fire engines, 1 ladder truck and two Battalion Chiefs comprising 26 personnel from the Menlo Park and Woodside Fire Protection Districts responded as part of a first alarm assignment.

A family of four, who were home at the time of the fire, self-evacuated and none were injured. Captain Rob Brovelli and his crew entered the home and could see active fire through ventilation and fan grates in the attic space above them. They started to pull the home’s ceilings in an attempt to extinguish the fire which had spread throughout the entire attic space of the one story home.

Two members of Menlo Truck 1 went inside to perform a primary search, while its Captain and a probationary firefighter, Carlos Carpenter, went up to ventilate the roof using a chain saw to create openings so the smoke and heat could escape from the attic, rather than bank down on top of the firefighters inside the building. 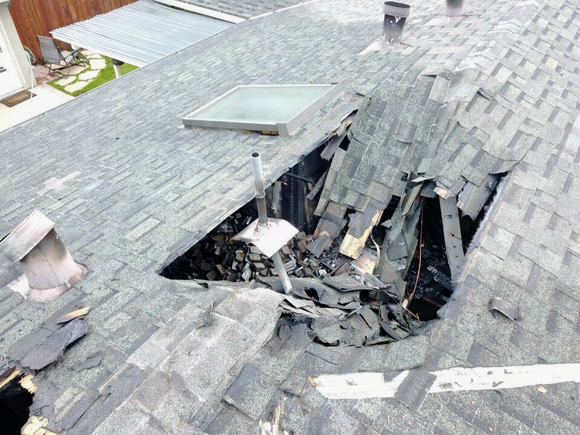 The Captain, a seasoned veteran with Menlo Fire who is considered an expert in roof operations, had just guided probationary firefighter Carpenter on his cutting of a square ventilation hole in the roof of the building, when he decided to scout out another location for a second ventilation hole. As he stepped across the top of the building’s roof, using a pole to “sound” or check for structural integrity of the roof, he felt the area underneath him get “spongy”.

He told Carpenter to “immediately get off the roof,” when suddenly, and without warning, the area underneath him gave way and he partially fell into the burning attic up to his arm pits. With the Captain essentially pinned in place, firefighter Carpenter sprang into action: He quickly grabbed the shoulder straps of the Captain’s Breathing Air Pak and with all of his might, pulled backwards to roll him out of the hole. 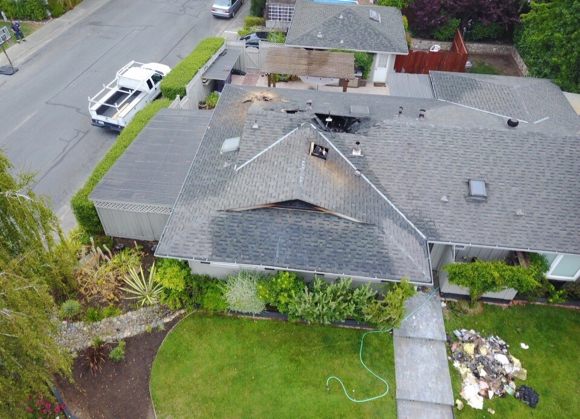 The Captain sustained significant burns to one hand and moderate partial burns to the other. He and Carpenter cut one more ventilation hole in the roof in order to complete their mission, before they were able get down off the building, and he was transported  to Stanford Hospital’s Emergency Room.

With his wounds cleaned and both hands bandaged, he was released from the Hospital early Saturday morning and will most likely be off for an unspecified period of time until he regains full use of both of his hands.

“Fire ground roof ventilation operations are inherently dangerous but necessary,” said Fire Chief Harold Schapelhouman. “We feel very fortunate that the Captain’s injuries were not more serious, given what occurred. Probationary Firefighter Carpenter distinguished himself Friday night, making all of us very proud and grateful for his quick action. It’s not lost on any of us that this call could have had a much worse outcome”.