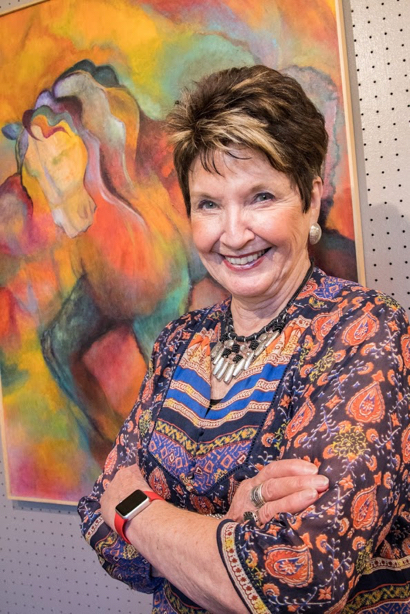 Former Hillview and Encinal schools art teacher Terry McMahon is coming home to Menlo Park, so to speak. She is the featured artist at Portola Art Galley in October with an exhibit of her arcylic paintings titled Bold Color…Brilliant Design, which includes vibrant still life, landscape and city scenes.

Terry, who resides “next door” in Palo Alto, has traveled and lived around the world. Her art work is influenced by her collection and love of folk art from the places she has visited and lived. Most of her work is imaginative, while some is decorative and even fanciful.

“If you were in my home, you’d see the same colors I use in my paintings,” she said. 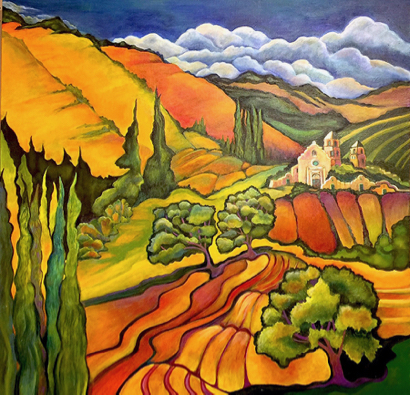 Between the two Menlo Park schools, Terry spent 23 years in the district. One hallmark of her tenure were the murals that lined the halls of “old” Hillview before the school was rebuilt in 2012.

You might think that destruction of the murals would bring sadness to Terry, but she says that’s not the case. “I think painting the murals was a wonderful experience for everyone, but I don’t think they needed to endure in perpetuity.

“I was lucky to have the participating of two great art docents — Sue Scheid and Wendy Ellis — and most of the murals were up at least three or four years. We did different things over the years depending on the students.” [Of note: one of Terry’s students at Hillview was her fellow Portola Art Gallery artist, Frances Freyberg.]

The murals also served to bring together her passion for art, teaching and travel when she took a group of Hillview students to China. “We’d done the design work before we left the U.S. and collaborated with Chinese teachers and students to get them painted in Beijing.”

Terry has been at the Portola Art Gallery for the past two years and sings its praise: “There’s a lot of diversity here — photographs, ceramics, paintings — pastels, acrylics, watercolor. And what’s nice about this gallery is that most other galleries allow you to exhibit just one painting and here everybody can have a whole panel.”

“California Dreaming” (30″x30″, acrylic on canvas) is one of the featured artworks in Terry McMahon’s October exhibit